The Red Devils, who must beat the Bundesliga side to guarantee their place in the knockout phase of Europe’s top club competition, have also left star midfielder Morgan Schneiderlin at home, according to the Daily Mail.

It is reported by the Mail that Schneiderlin was ruled out by a hip injury he suffered during Saturday’s 0-0 draw at home to West Ham.

Meanwhile, the same newspaper claim that Rooney has an ankle problem, although a questionable internet rumour suggests that his absence is due to another issue…

In total, United have seven senior stars on their current injury list, according to Eurosport, who name Marcos Rojo, Luke Shaw, Antonio Valencia, Phil Jones and Ander Herrera as the other poorly players.

Having considered Louis van Gaal’s options, here is the XI we think he will play at the Volkswagen Arena. 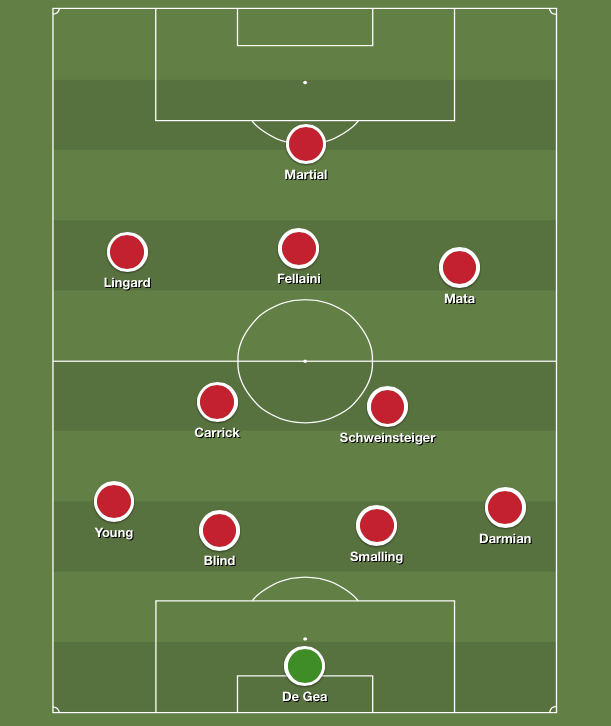 Since returning to the side in August, goalkeeper David de Gea has started 17 of United’s last 18 games in all competitions. His only night off came when Middlesbrough visited Old Trafford in the Capital One Cup.

De Gea has helped United keep nine clean sheets in his 17 appearances during the 2015-16 campaign. A 10th shutout could be much-needed against Wolfsburg, especially considering United’s recent shyness at the other end – Van Gaal’s men have failed to score in five of their last nine matches.

Daley Blind and Chris Smalling have started in United’s last eight games, so it would be a huge surprise if either did not make the starting XI in what is arguably the club’s biggest match of the season so far.

Matteo Darmian is expected to line up at right-back, while Ashley Young may get the nod to play on the left side of defence, having proven that he is disciplined enough to operate in that position previously.

With Schneiderlin sidelined, the experienced pair of Bastian Schweinsteiger and Michael Carrick could well be the men tasked with protecting United’s back four, as well as regaining and retaining possession.

Further forward, Juan Mata must start. Without the Spaniard, United would be desperately short of creative flair.

Marouane Fellaini completed 90 minutes against West Ham, so he is a probable candidate to play alongside Mata. Fellaini can provide an additional goal threat, while he is also an asset at set pieces.

Jesse Lingard has kept Memphis Depay out of Van Gaal’s first XI in recent weeks, so the young Englishman is more likely to start, leaving United’s Dutch summer signing waiting in the wings to play the role of super sub.

Anthony Martial simply has to start up front, because, with Rooney injured, Van Gaal has no other serious striking option.