Asamoah Gyan’s lawyer has confirmed that his client is no longer being charged of sexually assaulting a young lady who accused the striker of rape and sodomy.

As reported by Goal, Kissi Adjabeng revealed that the Ghana striker had been cleared of all of the allegations levelled at him, and was now free to continue with his life without the ongoing acrimony.

22-year-old student Sarah Kwablah made the accusations against Gyan in June, but, as confirmed by Adjabeng, the revelations were part of a plot to blackmail the forward, threatening to disclose a sex tape depicting the pair’s antics together.

While 30-year-old Gyan has confirmed that he had a sexual relationship with Kwablah, he always asserted that the relationship was consensual.

His lawyer has finally confirmed that the Black Stars hitman is in the clear. 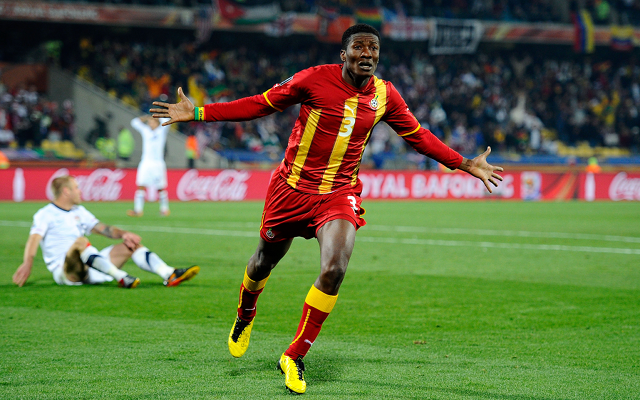 “We can confirm to you that Asamoah Gyan has been cleared of all allegations of rape and sodomy charges levelled against him by Sarah Kwabla,” Adjabeng began.

“Asamoah Gyan fully cooperated with the police during investigations which have come to an end.

“At the end, the police forwarded the docket to the Attorney General for advice.

“After a careful study of the docket, the Attorney General has concluded that the rape and unnatural canal allegations made by Sarah Kwablah against Asamoah Gyan are totally baseless and that the docket should be closed.”

Gyan currently features for Chinese moneybags Shanghai SIPG, having made the move from UAE side Al-Ain earlier this year.

It’s been a rocky 12 months for Gyan, who suffered malaria in January and February during the 2015 Africa Cup of Nations [Mirror].

He previously featured for Udinese and Modena in Italy, as well as Stade Rennais and Sunderland.