Liverpool will be aiming to bounce back from last weekend’s shock defeat to Newcastle United when they host West Bromwich Albion on Sunday.

The Reds lost 2-0 at St James’ Park in what was arguably their worst performance under Jurgen Klopp’s management. So will the German make changes?

Here, CaughtOffside predicts how Liverpool may line up for the Baggies’ visit to Anfield.

The Belgian kept a clean sheet in the Europa League on Thursday and remains number one for now.

Has started every Premier League game since joining the Reds from Southampton in the summer.

Skrtel has also been an ever-present for Liverpool in the top flight. His own goal against Newcastle put him level with Anfield legend Jamie Carragher on seven in the Premier League.

The steadily improving Croatian will keep his spot with Mamadou Sakho still sidelined.

Had a stunning volley incorrectly ruled out on Tyneside for offside, and will again provide an attacking threat from full-back.

Klopp indicated that the Brazilian will be his holding midfielder against Albion by resting him in midweek.

The German international missed the defeat to the Magpies through suspension but should return in place of Joe Allen.

Jordan Henderson got some crucial minutes under his belt versus Sion, but shouldn’t be pushed too hard, too soon. Milner will retain his place, and the armband.

Klopp seems to be a big fan of the youngster and he may get the nod over Adam Lallana to inject an attack again without Daniel Sturridge with some pace.

Liverpool’s Brazilian magician came through unscathed from his 30-minute cameo in Switzerland and is expected to start after missing the last two Premier League games.

Christian Benteke was hooked after a disappointing hour against Newcastle, so Klopp may go with Firmino through the middle as he works so well with Coutinho. 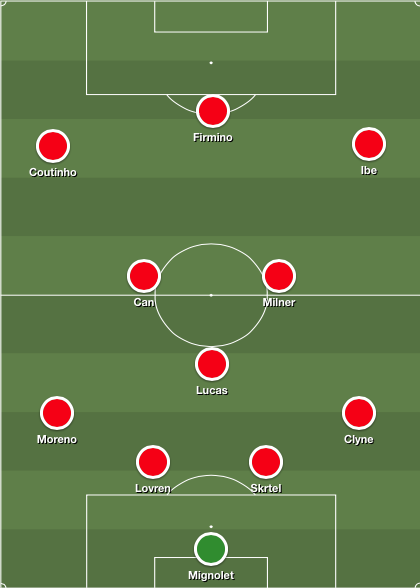