Manchester City moved up to first place in the Premier League on Saturday with a dramatic 2-1 victory over Swansea City at the Etihad Stadium.

In truth, Manuel Pellegrini’s Citizens didn’t need to find top gear in front of their home fans during a sluggish performance in which they never truly found their attacking fluency…at least not until the dying moments of the match.

Wilfried Bony, who moved to City from Swansea at the beginning of the year in a £28 million deal which made him the most expensive African player in the game [BBC Sport], opened the scoring in the 26th minute when he headed home a Jesus Navas corner.

While the Ivorian striker deserves credit for giving the Citizens the lead, and for stepping up in the absence of Sergio Aguero, his goal was as much about Swansea’s half-hearted defending as it was about his offensive incision.

Swans boss Garry Monk was dismissed during the week after guiding the Welsh outfit to one victory in their last 11 matches [BBC], but interim boss Alan Curtis wasn’t able to prompt an upturn in fortunes.

While Federico Fernandez and Ashley Williams were poor in the heart of the defence, the team’s offensive players also struggled to shine. 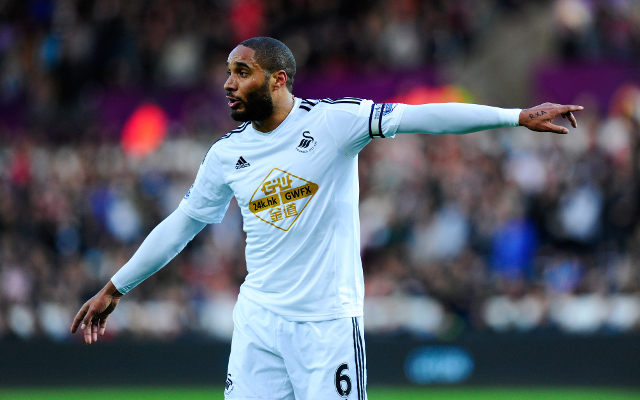 Ki Sung-yueng was a shadow of his former self, Leon Britton appeared clumsy in possession, and Andre Ayew’s showing fell way short of the kind of outing he was delivering at the beginning of the season, when he made such an instant impact after moving to Wales from France.

In truth, the only Swans player who impressed was Gylfi Sigurdsson, who thought he’d scored late on, only for the referee to bring back play after Bafe Gomis was adjudged to have fouled Joe Hart.

Gomis thought he’d rescued a point for the visitors moments later when he profited from some miserable defending from City to latch onto a through ball from Fernandez before lashing past the England No. 1.

However, there was time for some late, late drama, as Yaya Toure sent a swirling shot over Lukasz Fabianski deep into stoppage time after a deflection off the back of Kelechi Iheanacho.

Here are the Man City player ratings as Pellegrini’s side go top of the Prem.