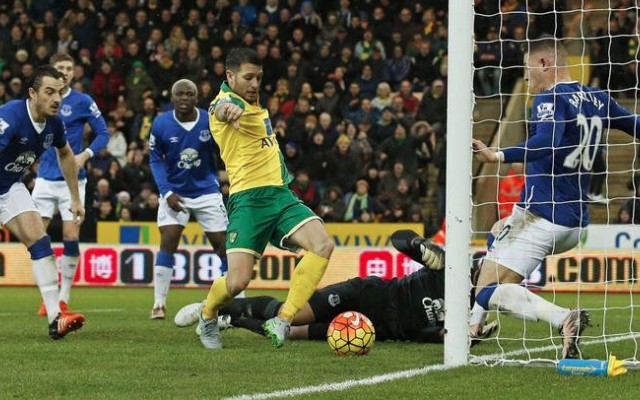 Norwich City trailed Everton 1-0 at half time of their Premier League match at Carrow Road. Needing a goal, who did manager Alex Neil turn to? That’s right. Defender Ryan Bennett. Wait, what?

But Neil’s inspired substitution immediately paid dividends as the centre-back’s towering back-post header from a Robbie Brady corner was eventually scrambled over the line by Wes Hoolahan.

Ross Barkley did his best to clear the ball off the line, but Hoolahan was on hand to prod home his second goal of the season to cancel out Romelu Lukaku’s opener within 62 seconds of the restart.

Goals from midfield will be vital to Norwich’s chances of staying up because their strikers are far from prolific. Winger Nathan Redmond is their top scorer with four and is not always a starter.

Forwards Dieumerci Mbokani, Cameron Jerome and Lewis Grabban have only five between them. In comparison – Lukaku has six in his last six top-flight games and 15 for the season in total.

Even a point against the Toffees this afternoon could see the Canaries in the relegation zone by the end of the day, as they could be leapfrogged by victories for Sunderland and Bournemouth.