The Gunners visit their favourite opponents on Sunday as title contenders take on relegation candidates in the Premier League.

Our friends at All Arsenal, have predicted what Arsene Wenger’s Arsenal lineup vs Aston Villa will look like at this weekend. As you can see, it’s exactly the same team that destroyed Olympiakos on Wednesday.

So, this is how All Arsenal expects the Gunners to line-up. Read their article below to find out why…

If Arsene Wenger drops Cech again this season, then it better be because he’s injured. We’ve seen how key the Czech has been, and he needs to start whenever possible.

The Spaniard hasn’t looked fully recovered from his short spell on the sidelines, but still needs to start ahead of the likes of Mathieu Debuchy.

Monreal is another player we really can’t afford to drop at the moment, as he makes us far more reliable at the back. He often looks questionable when left one-on-one, but he’s been steadily improving week after week since he arrived.

There have still been plenty of people calling for Gabriel Paulista to replace the giant German, but his performance against Olympiacos suggests he deserves to keep his starting spot.

As Rio Ferdinand said, Laurent Koscielny is far and away the best defender in the Premier League. We miss him badly when he’s injured, so it’s a huge boost that he’s currently fit.

The Frenchman seems convinced that he’s no longer a defensive midfielder, and is seen regularly marauding forward into the box. We miss Francis Coquelin badly, but Flamini is really the only option we have. There’s always a chance Wenger will experiment with Calum Chambers, but the youngster doesn’t seem ready just yet.

Ramsey is relishing playing in midfield once again, and is thriving during Santi Cazorla’s enforced absence. He offers something very different to the Spaniard, and we tend to see him between the lines and making runs beyond the strikers regularly. There are question marks over whether he and Flamini work in midfield, but time will tell.

It seems ridiculous to be justifying Özil’s inclusion in the side, as his performances really speak for themselves. There were a few concerns over a “tight calf” before the Olympiacos clash, but if he’s fully fit then he’s the first name on the teamsheet.

The Costa Rican looked way out of his depth earlier this season, but has grown into himself as the campaign goes on. He was excellent against Olympiacos in midweek, and deserves to keep his starting spot ahead of Alex Oxlade-Chamberlain. Campbell looked far better once he’d swapped flanks with Walcott – mainly as the defensive balance was much improved – so we expect them to do so from the start this time around.

Walcott understandably had a bit of ring rust against Olympiacos, but was still making some really dangerous runs and getting into the right positions. Hopefully he regains his match sharpness quickly, as with Alexis Sanchez unavailable we need the speedster at his best.

It’s impossible to drop the Frenchman after his hat-trick heroics against the Greek side on Wednesday night, so he should retain his place up front. There was a worrying moment when he went over on his ankle just before his second goal, but hopefully he’s shaken that off completely and is ready to continue his fine goalscoring form. 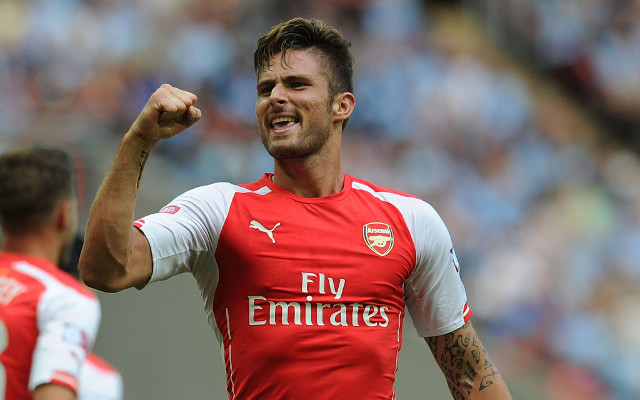