Arsenal beat Aston Villa 2-0 in the Midlands this afternoon to climb to the top of the Premier League.

Our friends at All Arsenal have rated how the Gunners performed at Villa Park.

There were a couple of worrying moments from the Czech international, but he held the ball well when required, and remained calm under pressure during some overconfident play from Per Mertesacker.

Got forward regularly, although failed to really have a huge impact on the attacking side of the game. Defended solidly.

Just like his compatriot, the Spanish full-back balanced forward play and his defensive duties well. His crossing could have been a little better.

Some good blocks and clearances, although there were a couple of scary moments between he and Cech.

The Frenchman made some phenomenal interceptions, racing out of defence to break up play – often doing Mathieu Flamini’s job for him.

Flamini was a ghost for most of the game, which is often a good thing from a defensive midfielder. He was barely involved though, and didn’t offer enough protection when he needed to. 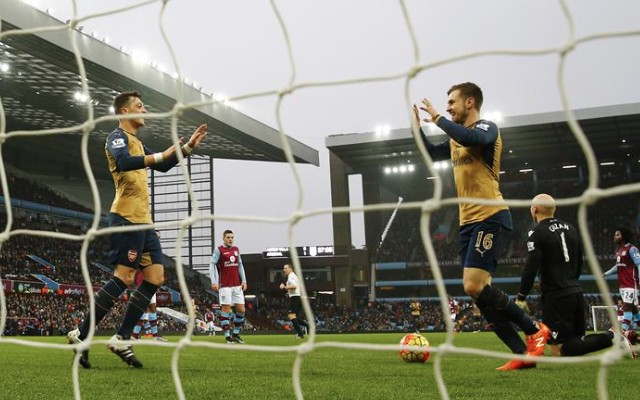 There were a few candidates for Man of the Match, but Ramsey just shaded it. He both started and applied the finish to the counter which gave us our 2-0 lead, and was constantly looking to get forward and make things happen.

He wasn’t quite as marvelous as he has been at times this season, but still proved instrumental and got the assist for the second goal.

Brought on to give him some time in midfield, and looked solid doing so.

Another player who didn’t impress as much as he has been recently, but still put in a decent shift. He was rightfully subbed off early on in the second half.

Really aggressive and lively going forward, but his end product is still lacking at times. He will be looking to make the most of this time when Alexis Sanchez is absent.

Earned the penalty that gave us our early lead and made some great runs, but still looked a little lacking in match sharpness. He also made a few defensive mistakes before being subbed off in the second half.

Gibbs is brought on to offer more defensive stability when we have the lead, and he did just that.

A candidate for Man of the Match, with his 50th Arsenal goal coming from the spot. He held the ball up well and caused Villa all sorts of problems.