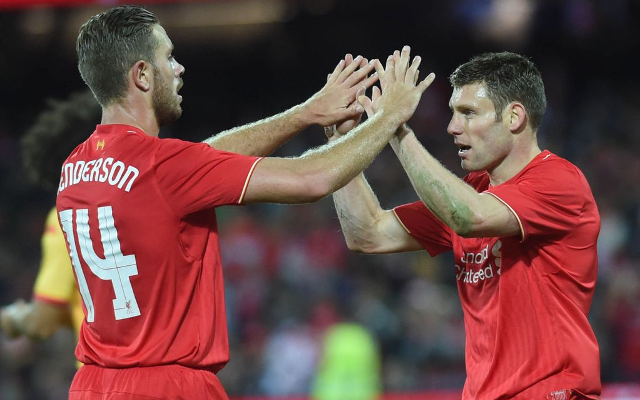 Empire of the Kop, the world’s biggest Liverpool blog, produced these player ratings for Jurgen Klopp’s players following the exciting 2-2 draw at Anfield versus West Brom this Sunday.

While they were chuffed with Emre Can and the returning skipper, James Milner took a battering…

Liverpool’s performance significantly improved today, but the result was a real travesty considering how many attempts on goal we had against Tony Pulis’s ultra defensive outfit – who played for set-pieces – and scored from two of them.

An injury time effort from Divock Origi stole us a draw, but we badly deserved to leave with three points.

Made a good save early on from Gardner at his near post, but let himself down after failing to catch a Baggies corner which resulted in their equaliser. The mistake will see calls for his head increase, and he almost made an awful mistake in possession just five mad first-half minutes later. How many more blunders can he be forgiven?

Was involved in the mix up for the Baggies first-half goal, but provided a largely positive right wing influence apart from that. Not great in the final third, as per usual.

Moreno often drifted into the middle of the pitch and played some passes, oddly, which is strange because he usually sticks religiously to the left flank. Tried hard, created width.

Headed over from a Milner cross in the second, and while Lovren wasn’t to blame for either goal, this sadly might be his last match for some time… The Croat was injured by a reckless Dawson challenge and it looked very nasty. Real sad news considering he was finally finding his feet.

His passing from the back wasn’t progressive enough, and the Slovakian can now expect a new defensive partner with Lovren crocked. Luckily Mamadou Sakho is close to a return. Liverpool concede way too many goals from set-pieces, and as defensive leader, Skrtel needs to be held accountable.

Playing as anchorman ahead of Lucas, Can controlled the game at the base of midfield. He made countless tasty passes and cannot be blamed for the fact his team-mates couldn’t convert enough of their chances.

Making his first Premier League start under Jurgen Klopp, Henderson opened the scoring after 21 minutes, much to the delight of the skipper and the crowd. He ran onto Lallana’s knockdown and buried. Henderson looked fit and raring to go, and will be crucial over Christmas.

Was lucky to not get into serious trouble for a nasty second-half tackle, as he patrolled the area to the left of Emre Can in midfield. No moments of real quality, unlike Henderson on the other side. Most Liverpool fans reckon the vice-captain, our highest paid player, deserves to be dropped now.

Lallana is criticised for lacking that ruthless streak in the final third, and unfortunately that proved the case late on. Running through on goal in the 80th minute, Lallana could have scored from 6 yards out, but finished weakly. He earned an assist for Henderson’s goal, but we needed him to arrive late on and he didn’t.

Blazed over from 12 yards early out when he should have given us a 13th minute lead, but Coutinho significantly helped our attacking fluency. His flicks, dribbles and intricate darts forward made space for others. Characteristically though, he took many long-range shots, few of which really troubled the keeper.

Leading the line, Benteke put in a better performance than he has recently – battling West Brom’s centre-backs. He saw one outrageous overhead kick just narrowly wide and could’ve won a penalty when he flicked the ball into a defender’s arm. In the 2nd he headed a Moreno cross over the bar, as he became the focal point of the attack as we searched for an equaliser, but his finishing wasn’t lethal enough.