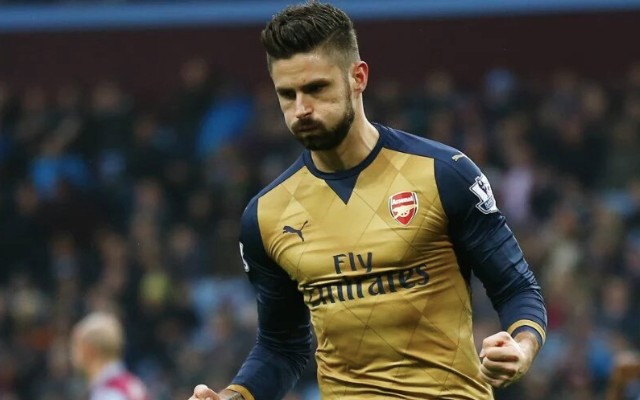 Olivier Giroud was Arsenal’s Champions League hero in midweek, and took just seven minutes to pick up where he left off by scoring the Gunners’ opening goal against Aston Villa from the penalty spot.

The Frenchman, whose hat-trick against Olympiacos on Wednesday rescued Arsenal’s European campaign, was steady from the spot for the second time this week to give his side a flying start.

Villa can have few complaints with the decision – Alan Hutton got himself in a miss and had his arms wrapped around Theo Walcott, but the awarding of the penalty was not without controversy.

Referee Kevin Friend initially turned down Arsenal’s appeals, and appeared to point to the spot only after Walcott’s fierce protests – a good five seconds after the initial foul – much to Villa’s despair.

Of course, there is also the possibility that Friend was advised by one of his fellow officials, and they ultimately help him reach the correct decision. In fact, Hutton was perhaps lucky to escape a red card.

Villa may not be satisfied, though until they get an explanation over Friend’s delay. Until then, their supporters may be cursing the lack of luck that always seems to haunt the team bottom of the table.

Remi Garde’s side prop up the Premier League and are eight points from safety, having only collected six points from their opening 15 games. Victory at Villa Park will send the Gunners top.