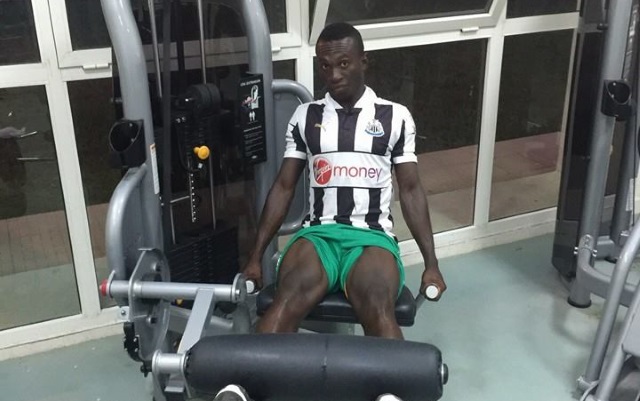 Ivorian starlet Franck Anderson Niangbo has published a photo of himself working out on social media, prompting speculation that he could be heading to Newcastle United during the January transfer window.

The 16-year-old wonderkid—who has made a promising start to his career as a part of the Cote d’Ivoire’s successful youth team—shared a shot which shows him working out wearing a Newcastle United kit.

Should this photo be construed as something of a come-and-get-me plea for Newcastle boss Steve McClaren?

during the Barclays Premier League match between Newcastle United and Arsenal at St James’ Park on August 29, 2015 in Newcastle upon Tyne, England.

Niangbo was a key member of the Ivorian U-20 side that shone at the U-20 Africa Championship in Senegal earlier this year.

The Junior Elephants were dumped out of the tournament after not losing a single game—drawing three times in the group stage—but they earned a few admirers, notably during a 2-2 draw with eventual winners Nigeria, in which Niangbo scored.

The powerful midfielder is a versatile option; he boasts the tenacity of his compatriot (and current Magpies star) Cheick Tiote, but also looks to press forward and find the net.

Could he be an unlikely solution for Newcastle as the Magpies look to pull away from the drop zone?