Manchester United were exposed against Norwich City on Saturday as goals from Cameron Jerome and Alex Tettey buried Louis van Gaal’s side 2-1.

Heading into this weekend’s fixtures, United sat in fourth place, and while some areas of the side have shown improvement under LVG this season, the attack has come in for criticism after a series of limp displays.

The failings of high-profile big-money additions Memphis Depay and Anthony Martial saw United dumped out of the Champions League, while the Red Devils had managed only 21 goals ahead of this fixtures—considerably fewer than their rivals at the top of the table, Leicester City, Arsenal, and local rivals Manchester City, however, it was United’s defence that was exposed against Norwich.

First of all, Cameroon Jerome outmuscled Michael Carrick, shrugged off Cameron Jerome and fired past David De Gea after being played in by Nathan Redmond, who had terrorised Phil Jones.

Tettey made it 2-0 in the 54th minute when Wayne Rooney—making his 500th appearance—was dispossessed in the heart of the park and the Norway midfielder, breaking at pace, finished coolly beneath De Gea.

Anthony Martial pulled one back for United, but the Red Devils faded as the game wore on, with United fans steadily filing out of a miserable Old Trafford.

Here are the Manchester United player ratings vs. Norwich City:

Arguably at fault for Norwich’s opener, and failed to organise his defence.

A left wing back? Maybe. A left back? Definitely not! 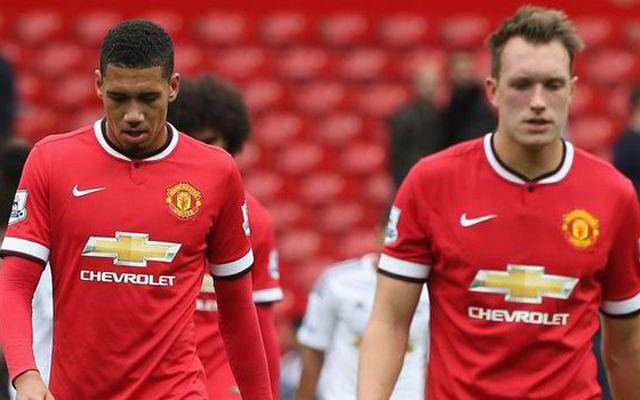 A nightmarish showing, and was badly exposed by Redmond. England should be concerned if Jones has to step in next summer.

Not at his best at all, although he wasn’t the worst performing in United’s out-of-sorts backline.

Fairly anonymous, and struggled to contribute in attack.

Exposed by Fellaini’s lack of discipline, although he was shrugged off too easily by Jerome for the opener.

Given an opportunity by van Gaal but wholly failed to take it. His positioning was atrocious, and Morgan Schneiderlin, Bastian Schweinsteiger and Ander Herrera can’t return soon enough.

Lethargic, and didn’t attempt to make much of a creative impact.

Out of tune before his injury, and hardly any better upon his comeback. Guilty of dawdling on the ball for Norwich’s second.

Contributed little of note, and was guilty of looking disinterested.