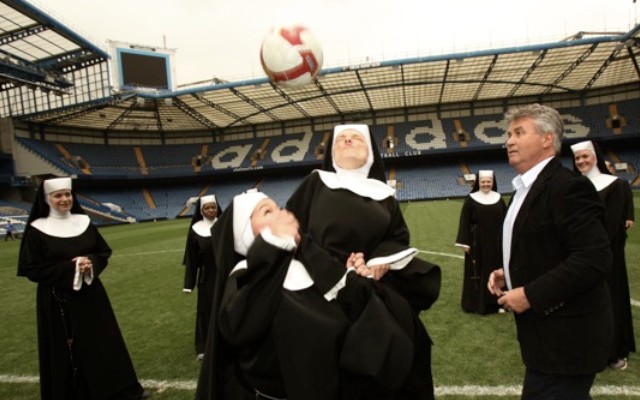 New Chelsea manager Guus Hiddink thoroughly enjoyed his previous stint in West London, as this image of him playing head tennis at Stamford Bridge with a group of nuns demonstrates…

Chelsea have confirmed – via their official website –  that former boss Guus Hiddink has been reappointed to replace Jose Mourinho until the end of the 2015-16 season.

Dutchman Hiddink, 69, stood in as interim Blues manager back in 2009 when he took charge from February to the summer following the sacking of Luiz Felipe Scolari.

Hiddink lost just one of 23 games during his first spell at Chelsea, winning 17 – giving him a whopping win percentage of 73.91%.

He won the FA Cup and guided his side to third place in the Premier League table.

Fourth place will be the aim for Hiddink this time around, but Mourinho’s awful start to the season means that will be very tough.

Hiddink rejoins Chelsea with the club down in 16th place, 15 points below the top four, with 23 rounds of fixtures left to play.

Our Twitter followers don’t seem to fancy Hiddink’s chances of steering Chelsea back into the Champions League next season via their Prem position.

BREAKING! Guus Hiddink is the new #CFC manager, signing until the end of the season. Where will his Blues finish?

However, Hiddink should not be underestimated. In addition to his fine performance as Chelsea boss first time around, his CV includes taking South Korea and Holland to the semi-finals of the World Cup, as well as steering Russia to the last four at Euro 2008.