Manchester United will be looking to bounce back from their embarrassing defeat to Bournemouth when Norwich City visit Old Trafford in the Premier League.

With several key figures coming back from injury layoffs, the Red Devils may see this as a perfect opportunity to end a five-match winless run in all competitions.

Here, CaughtOffside predicts how Louis van Gaal’s side may line up at the Theatre of Dreams…

The Spaniard made a rare mistake in the defeat to Bournemouth as he was beaten directly from a corner. Might have a quiet afternoon against a Norwich side who struggle to score goals.

The 22-year-old made his Premier League debut at the Vitality Stadium and will continue to deputise at right-back with Matteo Darmian and Antonio Valencia still unavailable, as ManUtd.com reports.

Louis van Gaal will be relieved to have the England international back to lead his defence after injury kept him out against the Cherries. Has been United’s best player this season.

Only fit for the bench last weekend but should be ready for a first start since November 21 as United’s back four begins to look recognisable again after the makeshift unit at Bournemouth.

The Dutchman’s versatility may be utilised by shifting him across to left-back in place of teenager Cameron Borthwick-Jackson. Marcos Rojo and Luke Shaw are still sidelined [ManUtd.com].

Will surrender the captain’s armband on his 275th Premier League appearance for the Red Devils. Five have been against the Canaries and he has only been on the losing side once.

The summer signing was an unused substitute against Bournemouth. He should come back into the starting XI, particularly with Bastian Schweinsteiger serving a suspension.

The only United player to have started all 16 of their Premier League games so far this season. The Spaniard has four goals and three assists – solid if not spectacular.

Has started United’s last three games, although in holding midfield. His goal against Bournemouth should be enough to get him the nod over fit-again Ander Herrera.

The youngster, without a goal in nine league games, has already played 27 times this season and may be suffering for it, but Van Gaal has little choice but to pick him with Memphis Depay under-peforming.

The England captain will make his 500th United appearance and do so in the striking position in which he has clocked up most of those. Missed the last three games with an ankle problem. 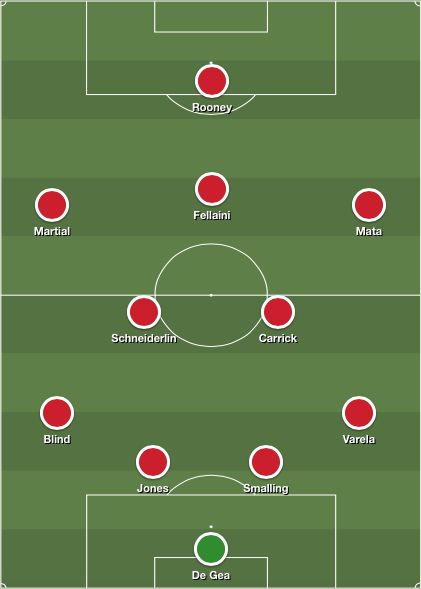