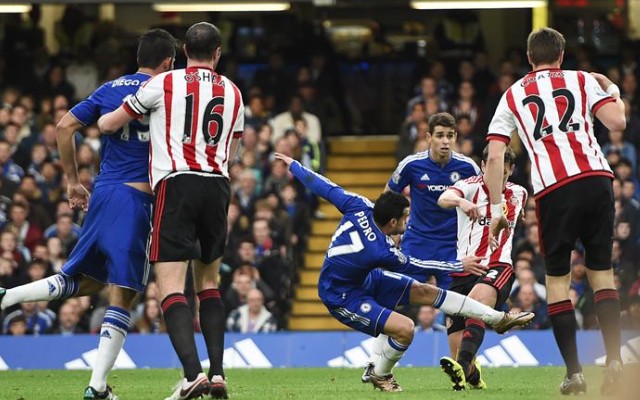 Chelsea wasted no time whatsoever in showing signs of improvement following the sacking of Jose Mourinho as they took a 2-0 lead into the break against Sunderland this afternoon.

The Blues, who parted company with the Special One on Thursday, produced arguably their best first-half performance of the season. Pedro thrashed home their second after only 13 minutes.

Branislav Ivanovic had earlier kicked off the post-Mourinho era with a towering header on six minutes as caretaker boss Steve Holland enjoyed a dream start against the relegation-haunted Black Cats.

Guus Hiddink was watching from the stands after his reappointment as interim manager until the end of the season was confirmed. On this evidence, he will be optimistic of overseeing Chelsea’s revival.

But it will frustrate the Stamford Bridge faithful that it was two players who greatly under-performed under Mourinho this season that have drawn a line under his time with the club so quickly.

Mourinho kept faith with Ivanovic throughout the Serbian’s sticky patch at the start of the campaign, while Pedro had gone 11 league matches without scoring since a debut goal at West Bromwich Albion.

The home supporters booed some of their own players as the teams were announced prior to kick-off, showing their respect to Mourinho. Their loyalties may soon change if this half is anything to go by.