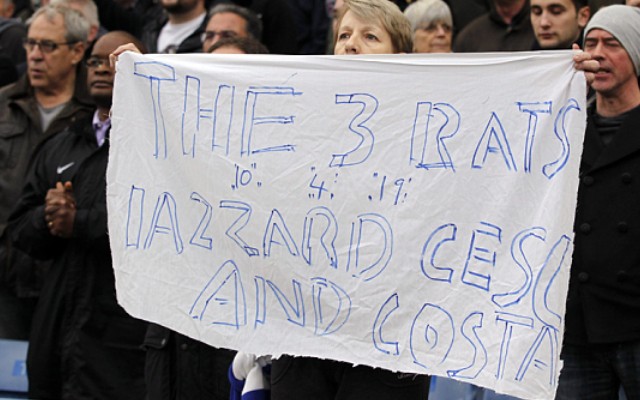 Who were the Chelsea rats?

Mourinho doesn't think Fabregas was one of the Chelsea rats, so who's the real #CFC vermin? https://t.co/hRCC7ofate

Chelsea’s 3-1 win over Sunderland on Saturday was a tense affair.

Fans cheered when their team scored, but it was far from happy families at Stamford Bridge.

Anger at Jose Mourinho’s sacking, which had been delivered just 48 hours earlier, was still strong around SW6.

Chelsea supporters used banners and songs to show their undying love for Mourinho, as well as their disgust towards some players, many of whom have been blamed for getting the Special One fired, through their poor performances and perceived lack of effort this season.

The image above has gone viral. The fan in the picture clearly blames Cesc Fabregas, Eden Hazard and Diego Costa more than most for manufacturing the departure of the club’s most successful manager.

Fabregas, Hazard and Costa – all of who were brilliant for the Blues last season – were branded as “rats” by the banner, which looks to have been written while the lady’s rage was still hot.

Fabregas and Costa were both booed on Saturday, while Hazard was injured and therefore got a lucky escape.

However, according to The Telegraph, Mourinho does not see Fabregas as one of the players who let him down.

The Telegraph claim that Fabregas was one of Mourinho’s “strongest allies” in the Blues dressing-room and that, prior to his dismissal, the Portuguese spoke to the former Arsenal captain and told him that he was planning to “rely heavily on him in the fight to save his job”

Fabregas seemed quite emotional following the news of Mourinho’s sacking on Thursday, judging by this Tweet.

Thank you for all you have done for me. I owe you a lot and we will all miss you. Good luck in the future. pic.twitter.com/RQlOTFrtzU

Mourinho could soon be back in work. The Sun report that he is being lined up to replace Louis van Gaal at Manchester United.