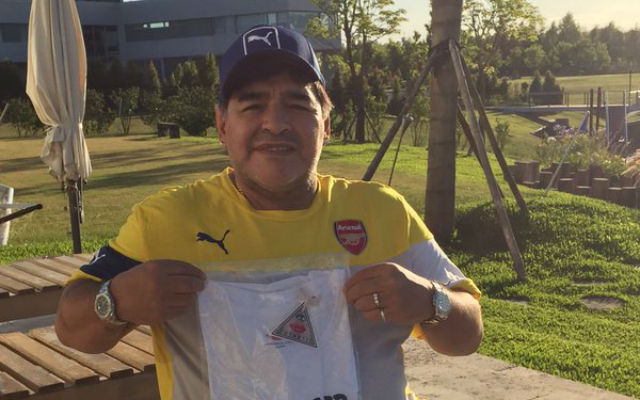 Could this picture be the proof needed to confirm that Diego Maradona is an Arsenal fan?

It’s not unusual to see former players don kits of clubs they never played for, but for one to wear full training gear as lounge wear must mean something, right?

Giannina Maradona uploaded a picture of her famous father to social media site Twitter on Sunday, that seemed to suggest he has already pledged his allegiance to the Gunners by going ‘full kit w****r’.

Maradona has previously stated his preference for Arsene Wenger’s men when he said in an interview back in 2008: “They play beautiful football. They break quickly – they defend and attack as one.

“I am a fan of Arsenal when I am in England.

“When I was 19 they tried to buy me and another player from Argentinos Juniors – around the time Ricky Villa and Ossie Ardiles signed for Tottenham.

“But it didn’t happen. I sometimes wonder what might have happened.”