Manchester City lost 2-1 to Arsenal and arguably their tag as Premier League favourites in the process as the Gunners won tonight’s top-of-the-table showdown at the Emirates Stadium.

The Citizens were two goals down at the break after strikes from Theo Walcott and Olivier Giroud, and their comeback fell short despite a wonderful late reply from Yaya Toure.

The defeat – a fifth away match in a row without victory, leaves City third in the standings, four points adrift of second-place Arsenal and a further two behind leaders Leicester City.

Here, CaughtOffside looks at who the villains were in this damaging loss for Manuel Pellegrini’s men…

Made a crucial save at 2-0 to keep City in the match. Embarrassingly nutmegged for Giroud’s goal but did not stand a chance with Walcott’s ferocious opener.

Could have got a bit closer to Walcott for the goal but generally kept City’s right pretty solid and also got forward to deliver some dangerous crosses.

A fine defender but looks lost without Vincent Kompany alongside him. Pellegrini desperately needs his captain back. They are not title contenders without him.

Kompany or no Kompany, Mangala is a liability to City. His stray pass led to Arsenal’s second and he made several more mistakes which could have been punished.

Struggled to keep up with the pace of Arsenal’s attackers and was lucky not to be booked two or three times in the first half. Not his usual attacking threat either.

The Belgian’s effort cannot be faulted but things just did not happen for him this evening. Missed a golden chance at 0-0 when he could have squared for Silva.

Tried his best but left exposed by Toure’s lack of assistance in front of the back four. 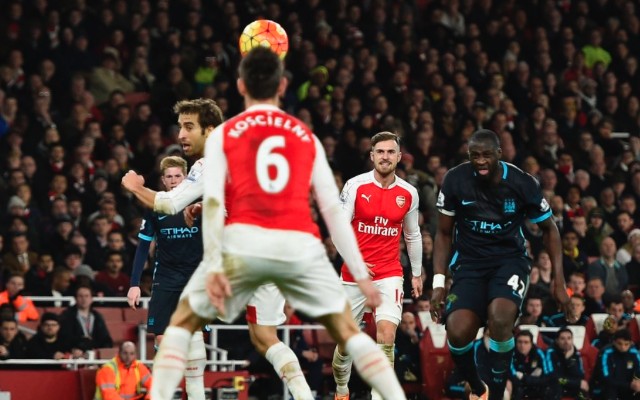 Must take some responsibility for again neglecting his defensive duties to allow Ozil so much room in the pockets, but he came alive in the last 20 minutes. His goal was an outstanding finish.

Asked to play wide left by Pellegrini and it was a tactical decision gone wrong. His job was to help City control the ball and they failed to do that.

So often we have seen the Spanish playmaker run these big games for City but tonight he could not get City going. Mathieu Flamini shackled him really well.

Did not appear ready for a game of this magnitude. Barely carried a threat and was taken off after an hour. He and City will live to fight another day though.

Would have been frustrated not to start but failed to make a significant impact off the bench.

Offered more in half an hour than Aguero did in his 60 minutes. Did some good work with his back to goal but was not enough of a goal threat himself.

Showed a shocking lack of conviction when sent through one-on-one with Petr Cech, trying to find Bony with a tame pass instead of taking on one of City’s best chances.