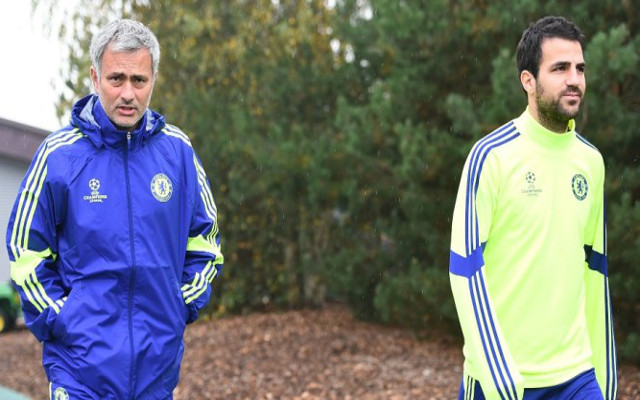 Many factors went into Chelsea owner Roman Abramovich’s decision to fire manager Jose Mourinho after a frustrating start to the season, not the least of which may have been leaks from the Chelsea locker room to the media of a rift between the Special One and his players. One of the suspected ‘rats’, midfielder Cesc Fabregas, has responded to claims that he was one of them.

According to the Metro, Fabregas has publicly denounced rumours that he had a bad relationship with Mourinho and said on Instagram that he actually had an “exceptionally good” relationship with his former manager.

‘I’m pleased that Pat Nevin and the BBC have now apologised and corrected their comments,’ Fabregas wrote.

‘I can reiterate that I had an exceptionally good relationship with Jose Mourinho as I will aim to have with any coach that I play for.

‘The football club is more important than any one player. We have all let the manager and club down this year as a collective unit. We will get this right of that I am sure.

‘With all your help we can put this period behind us and make Chelsea great again.’

Chelsea won the Premier League and League Cup titles last year but began the season with one of the worst title defenses in history. The Blues claimed just 15 points in their first 16 matches – the worst in Premier League history – and were eliminated early from the League Cup tournament by Stoke City.

Fabregas, along with reigning Premier League MVP Eden Hazard, plus Diego Costa and Oscar, have all been out of form this season and their poor play nearly cost the club elimination from the Champions League.

Despite ultimately clinching a spot in the Champions League in a win over FC Porto, Abramovich decided to fire Mourinho and replace him with interim manager Guus Hiddink.

Hiddink would lead Chelsea to a 3-1 win over Sunderland in their first match post-Mourinho.