European giants Paris Saint-Germain and Juventus are understood to be squaring up for a transfer tug of war for the services of Tottenham Hotspur playmaker Christian Eriksen.

The Danish attacking midfielder joined Spurs from Ajax in 2013, and after a tricky first season, has gone onto prove his worth at White Hart Lane.

Indeed, Eriksen can be considered one of the few success stories out of the clutch of players signed to replace Gareth Bale when the Welsh superstar moved to Real Madrid two and a half years ago.

Eriksen has shone so far this season—contributing six assists and scoring two goals in 15 outings—but his future at the club is uncertain, with the player keen to improve on his current £30,000-per-week salary, according to the Standard. 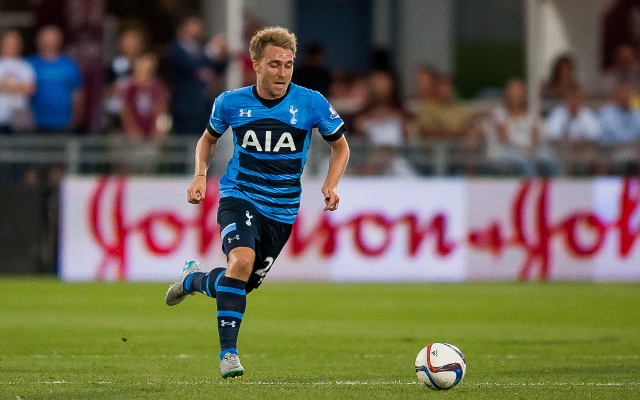 However, the English source also report that it’s not certain that Eriksen will continue at Spurs, with both Paris Saint-Germain and Juventus understood to be keen on the attacker.

The 23-year-old remains a crucial component of Mauricio Pochettino’s plans in North London, and if the Lilywhites are realistic about establishing themselves as a regular Champions League side, they would be wise to extend Eriksen’s contract and see off the attentions of the European giants.

Eriksen’s former international teammate Thomas Sorensen has insisted that even if Spurs don’t qualify for the Champions League this season, Eriksen would be unlikely to seek a move away [Omnisport via Standard].