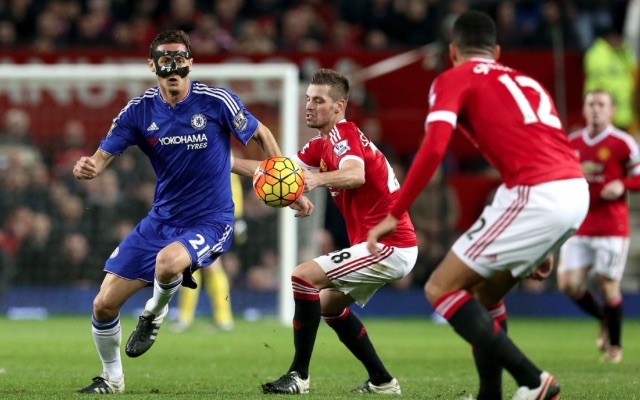 Chelsea drew 0-0 at Manchester United on Monday as the two underperforming giants of English football shared a point in their final game of 2015.

This was not a typical stalemate. Chelsea did not park the bus.

Despite the scoreline, the match was highly entertaining. Both goalkeepers made great saves, United hit the woodwork twice and Nemanja Matic blew a glorious chance with one of the ugliest shots of all time.

The draw leaves United without a win in eight matches in all competitions. Louis van Gaal’s Red Devils now sit sixth in the Premier League table, five points behind third-place Tottenham Hotspur and Manchester City, who are fourth with a game in hand – Tuesday night’s visit to Leicester City.

At the midway point of the season, Chelsea have just 20 points from their first 19 league fixtures. The Blues are 14th in the table, three points above the relegation zone and 19 short of leaders Arsenal.

Read on for Chelsea player ratings vs Man United, as well as more video snippets.

Had one shaky moment as he made a poor clearance to set United on the attack. However, his overall performance was very good, while this save to deny Ander Herrera was simply stunning…

Made more tackles – five – than any of his Chelsea teammates.

Got caught out of position a couple of times, but, other than that, he coped with the big occasion well.

Terry clearly raised his game for this one. He beat Wayne Rooney hands down in the game’s big battle – former vs current England captain.

His performances have been up and down this season, but he was back to his best 2014-15 form today.

Was picked to do a job and that’s just what he did. Offered next to nothing in an attacking sense, but very little got past him in midfield.

Other than his embarrassing miss, Matic had a very good game. He defended well and tried to build attacking momentum whenever possible. In total, he completed five dribbles – more than any other player on the pitch.

Chelsea’s player of the season had an off day. He was replaced on 69 minutes by Ramires (6/10), who sured things up in the centre of the park.

The speedy Spaniard was the pick of Chelsea’s attacking midfielders. He created three chances with his passing and forced United goalkeeper David de Gea into an excellent save.

Did well up front in a false nine position. Hazard’s hold-up play was impressive and he won six free-kicks.