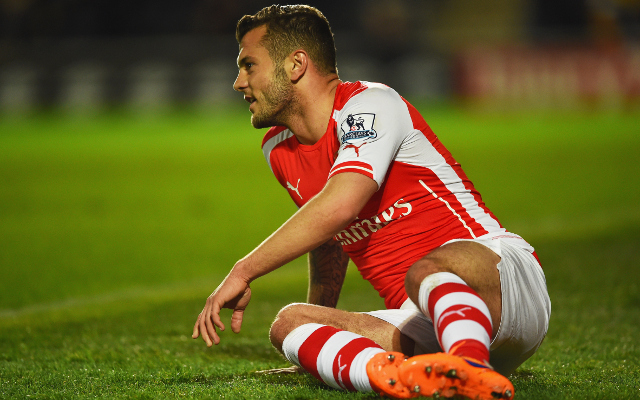 The already depth-challenged Arsenal midfield will continue to be without the services of star midfielder Jack Wilshere for the foreseeable future after an injury setback pushed back his timetable well past the start of the new year.

According to the Daily Mail, Wilshere’s return from a hairline fracture in his leg won’t be before February 2016 at the earliest. The 23-year-old midfielder has not played at all this season since injuring his ankle during the pre-season.

Arsene Wenger confirmed that Wilshere’s recovery is going slowly and that he does not plan to rush him back despite the team’s current struggles by all midfielders not-named-Mesut-Ozil.

‘He will not be back before February, that’s for sure,’ Wenger said. ‘I said February but honestly I don’t know.

‘I let him do his recovery. It’s going slowly. Once he goes again, goes outside to train, once he is back again into sharp, hard work physically, you count five or six weeks, so at the moment he is not there yet.

‘We are a bit short because of the injuries we have. But sometimes as well the solution is inside and you have to accept that because we are a club which has always given a chance to layers we have educated. People forget that sometimes and always want new faces.’

The injury to Wilshere he suffered during the summer was his 13th reported injury since October 2009 – and his eighth ankle injury since March 2013.

In addition to being out of Arsenal’s starting lineup for the next few months, Wilshere will also miss time with Roy Hodgson for England ahead of the European Championship this summer.