The selling of Jose Mourinho scarves at a Chelsea game would not previously have been significant.

But the fact that Mourinho’s face is emblazoned all over red Manchester United scarves outside Old Trafford prior to this evening’s Premier League clash with Chelsea makes this occasion very special. 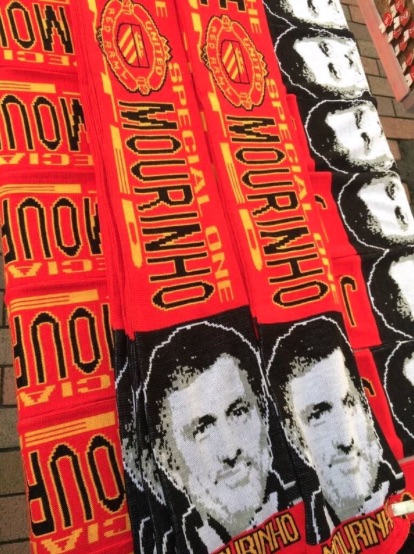 Some United fans, sick of the below-par results and unadventurous football under Louis van Gaal, have been begging for the Portuguese’s appointment since his sacking by the Blues earlier this month.

The Red Devils could drop to as low as eighth in the Premier League table should they lose to Chelsea, who are languishing in 15th after Mourinho oversaw their worst start to a league season in 37 years.

But that does not appear to have put United fans off the Special One, who would be the favourite to replace Van Gaal should the Dutchman be sacked following defeat tonight, as the Daily Star claims.

If Van Gaal is sacked for Mourinho soon, at least some United fans will have their accessories ready!