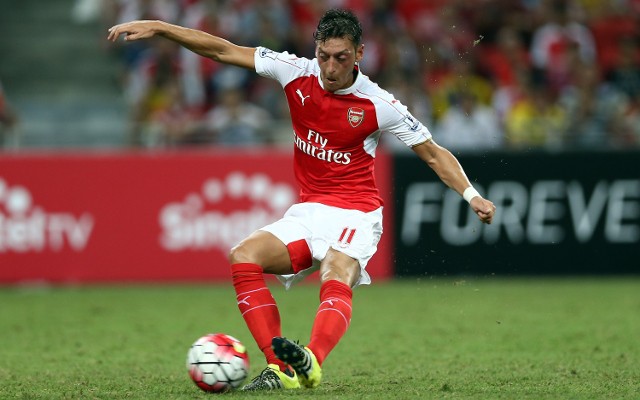 With Leicester City still to play Manchester City this week, Arsenal moved top of the table with a 2-0 win over relegation candidates Bournemouth. The guys at All Arsenal have provided us with a match report, including all the goals and the talking points from the game.

There were a number of changes ahead of our clash with Bournemouth, possibly due to a combination of tight fixture scheduling and our poor performance against Southampton. Putting out some fresh legs paid off though, as we managed to bounce back and secure a 2-0 victory over the Cherries at the Emirates.

It was a tentative start to the game, and there were fears that we were going to see the same Arsenal that were torn apart by Southampton. Thankfully we grew into the game though, and slowly began to dominate the possession.

Per Mertesacker in particular looked really shaky, and could well have given away a goal or two early on. He had Gabriel Paulista alongside him though, who was excellent throughout the game.

We should have scored when Theo Walcott’s superb run was picked out by Mesut Özil, but he and Olivier Giroud seemed to get in each other’s way and the England international connected with nothing but the air.

The Bournemouth goalkeeper was picking the ball out of the back of his net shortly after though, with Gabriel Paulista scoring from a corner. It was a great delivery from Özil and a fine header from the Brazilian, but it was the poor marking from the Cherries that stood out.

Gabriel was totally unmarked in the box, and Artur Boruc could do nothing to prevent him from firing home a header. 1-0.

We uncharacteristically looked dangerous from set pieces throughout the game, with Gabriel in particular getting his head to everything. We possibly should have been further ahead before the end of the half, but poor finishing from Walcott prevented it.

There were some close calls in the second half, with one chance in particular looking worrying. Gabriel thankfully made a great block to prevent the ball being fired dangerously across the box, and we promptly went up the other end and doubled our lead.

Some quick passing saw us racing towards the Bournemouth defence, with Mesut Özil playing a clever one-two with Olivier Giroud. The Frenchman flicked the ball deftly round the corner to give it back to the 27-year-old, who calmly slotted it past Boruc. 2-0.

Giroud and Walcott both had fantastic chances to extend our lead, but a lack of clinical finishing meant we had to settle for just two goals.

The win takes us top of the league (even if it’s only until Leicester City meet Manchester City this week), but the pressure is still on our opposition heading into the new year.