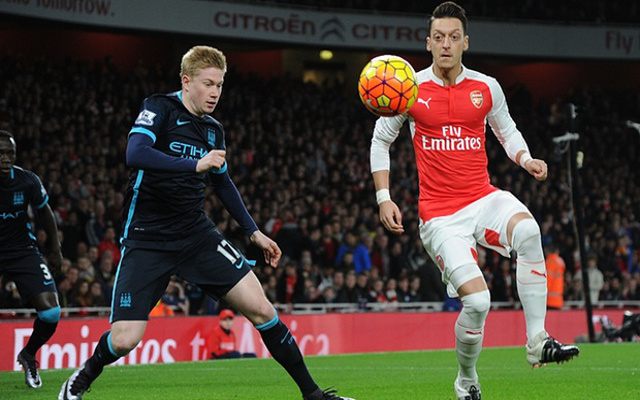 Arsene Wenger has admitted that Mesut Ozil’s “sensational” form this season has reminded him of Dennis Bergkamp at his Arsenal peak.

Ozil supplied his 16th assist of the season and scored the other goal himself during Monday’s 2-0 win over Bournemouth at the Emirates Stadium.

That is double his nearest rival – Manchester City’s Kevin de Bruyne – as he chases Thierry Henry’s record for 20 in a Premier League campaign.

Ozil is on course to smash that total with still 19 games to play. His nine chances created against Bournemouth is a division high for the season.

And he is starting to add goals to his game as well. The German World Cup winner has three in his last eight matches after managing only two in 21 outings.

His improvement in this regard is why Wenger feels he can honour the 27-year-old playmaker with a comparison to Arsenal legend Bergkamp.

“Look at the numbers. On the assists they speak for him,” Wenger told reporters after a victory which secured Arsenal top spot, according to the Metro.

“He has become a complete sensational football player. I am very, very happy with his performances. He is one of the best in Europe certainly. In his position, he is sensational.