Wayne Rooney scored a crucial winning goal as Manchester United won for the first time in nine matches courtesy of a 2-1 victory over Swansea City in the Premier League.

Anthony Martial ended fears of another 0-0 draw at Old Trafford with a 47th-minute opener which was cancelled out by Gylfi Sigurdsson’s looping header 20 minutes from time.

But it was not to be another dark day for Louis van Gaal as Rooney flicked home a brilliant 77th-minute winner from Martial’s cross to secure the Red Devils a much-needed three points.

Here, CaughtOffside rates how United performed against the managerless Swans…

Had a couple of simple saves to make either side of half time, but was never truly stretched until an equalising goal which was agonisingly out of his reach.

Offered United an outstanding attacking outlet down the right, providing Martial’s header with a cross into a great area. A serious contender for man of the match.

Came on leaps and bounds throughout 2015 and started this year with another decent display. Prefers physical battles and Swansea’s attack did not have a focal point.

Solid until he was substituted at half time for Matteo Darmian. It is not clear yet whether it was an enforced swap or tactical, but Jones’s fitness record is against him.

Started at left-back and was shifted inside to partner Smalling midway through the second half. His passing was excellent but his defending is shaky and remains a concern. 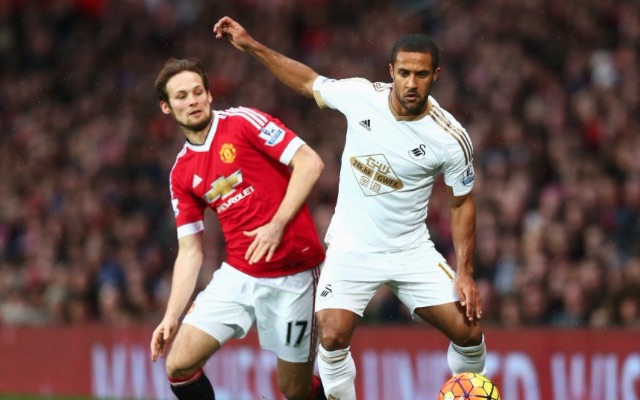 The Frenchman enjoyed one of his better games in a United shirt. He won all three of his tackles, made five interceptions, created two chances and completed 93% of his passes.

United had drawn five of their last six games in which the German had partnered Schneiderlin by a 0-0 scoreline. That curse was broken today despite Schweinsteiger being quiet.

Started brightly but had less of an impact on the game as it went on, although his narrow positioning allowed Young the room to bomb forward down the right with great success.

Linked up nicely with Mata to create a couple of early openings. It was Rooney who provided him with his best chance, though – one which he blazed over from the edge of the box.

The Frenchman put in the sort of man-of-the-match display which will give United fans hope that the team can rally around him going forward. Put away his header clinically, and supplied Rooney with the second after the direct running and dribbling which saw him trouble Swansea’s defenders all day.

The England captain enjoyed a rare moment of joy in this difficult season with a vital winning goal. He took it really well, wrapping his left foot behind his right to flick into the bottom corner.

Played at right-back, left-back and centre-back in his 45 minutes on the field but did not convince in any of them. Modou Barrow gave him a torrid time and escaped him easily for Swansea’s equaliser.

Came on for Young to give United more of a natural defensive presence, particularly from set pieces, but Swansea won most of the headers from the series of late balls into the box.

Merely a wind-down-the-clock substitute from Van Gaal as Herrera strolled off in stoppage time. A bit of a damp way for the veteran to mark his 400th appearance for United.