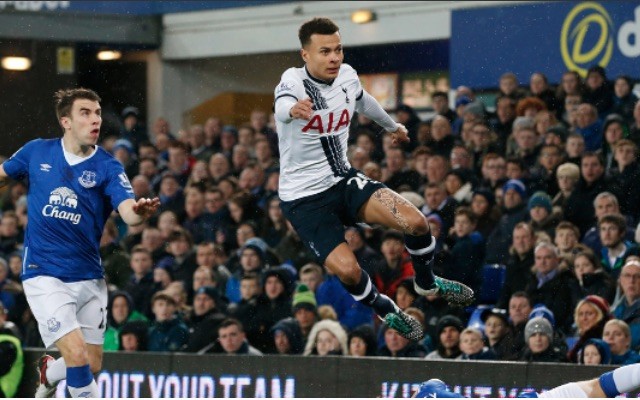 Dele Alli’s stock rose some more with a fantastic equaliser for Tottenham Hotspur in their Premier League clash with Everton at Goodison Park this afternoon.

The 19-year-old midfielder showed an outstanding touch to bring down Toby Alderweireld’s long pass and backed that up with an exceptional finish past Tim Howard.

It is the newly-capped England international’s fifth goal of the season and second in combination with Alderweireld, who perfectly picked out Alli’s intelligent run.

Their 45th-minute leveller was the least that Spurs deserved after a dominant first half in which they struck the woodwork through both Harry Kane and Ben Davies.

Mauricio Pochettino’s side fell behind against the run of play on 22 minutes when former winger Aaron Lennon produced an unlikely half-volley from Romelu Lukaku’s layoff.