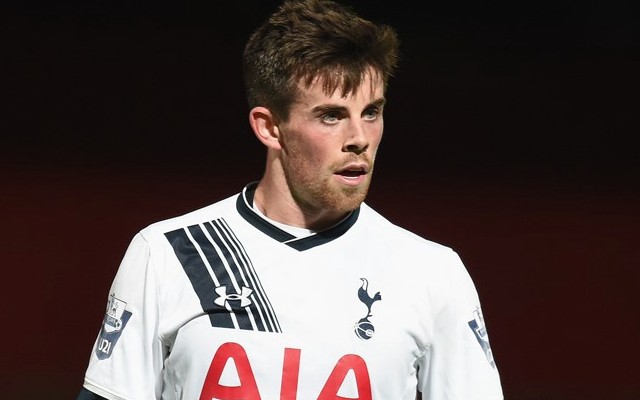 Three years ago, Tottenham Hotspur had two Gareth Bales – the real one and his younger body-double, Kenny McEvoy.

Bale delighted Spurs fans with his superhuman performances, which inspired his ‘one-man team’ to 72 points in the 2012-13 season – Tottenham’s highest ever Premier League tally.

Bale left Tottenham for Real Madrid in September 2013 for a world-record transfer fee, after scoring 55 goals in 204 games for the White Hart Lane club.

Clearly frustrated and seemingly a little angry by how his time at Tottenham had transpired, McEvoy published a statement on Twitter.

It read: “”I can tell you now that after five years at Tottenham I am no longer a THFC player.

“In my own head I made the decision five months ago that I wanted to go elsewhere to start my career as first-team player, as I did not see it happening at Tottenham no matter how much effort I gave it.

“I can’t thank my lawyer enough for helping me get out and Tottenham agreed a month ago to finally let me go.

“Thank you to my wife for putting up with my decision and all the rubbish in the meantime, not knowing what was happening, and having to put her own life on hold. At least now it’s down to me, which is what I have always wanted.

“The decision was purely my own and, wherever I go next, I know that I will be happy playing as a first-team player, and I’ll have the chance to prove people wrong that have ever doubted me.

“Thank you to the fans at Tottenham that did support me. I appreciate every one of you. Let’s see where the future takes us.”

McEvoy had been on loan at York City since November, but, as he is now a free agent, the League Two side will have to sign him on a permanent contract if they wish to keep him.