Willian paid homage to a Chelsea hero when celebrating his stunning goal against Crystal Palace.

The Brazilian scored Chelsea’s second in their 3-0 Premier League triumph at Selhurst Park on Sunday with a thunderous 20-yard strike as the Blues won for the first time under interim boss Guus Hiddink.

The 27-year-old revealed on his Instagram page today that he celebrated with the traditional knee slide and salute that former Chelsea striker Didier Drogba made famous at Stamford Bridge.

Drogba scored 164 goals in 384 games across two spells in West London. He played alongside Willian during his second stint at Chelsea and helped the club win last season’s Premier League title.

It has been a dramatic fall from grace for the Blues this term, but Willian has not let his standards drop. He is Chelsea’s top scorer with nine goals, seven of which have come from outside of the box. 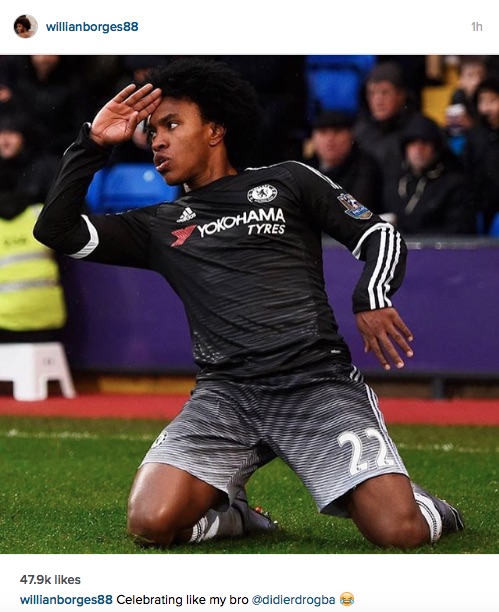