Jamie Carragher was out celebrating with some fellow Liverpool legends in Sydney last night when he bumped into a couple of big names in Australian cricket.

The ex-Reds defender had helped a Liverpool all-star XI to a 4-0 win over an Australian legends team in an exhibition match at the ANZ Stadium earlier in the day.

And he could not help but rub salt into Australian wounds by taunting captain Steve Smith and coach Darren Lehmann about their Ashes loss to England last summer.

Carragher posted a picture of him enjoying a drink with the pair to his Instagram account. It was all smiles on camera, but the scouser had a cheeky dig with a #wevestillgottheashes caption. 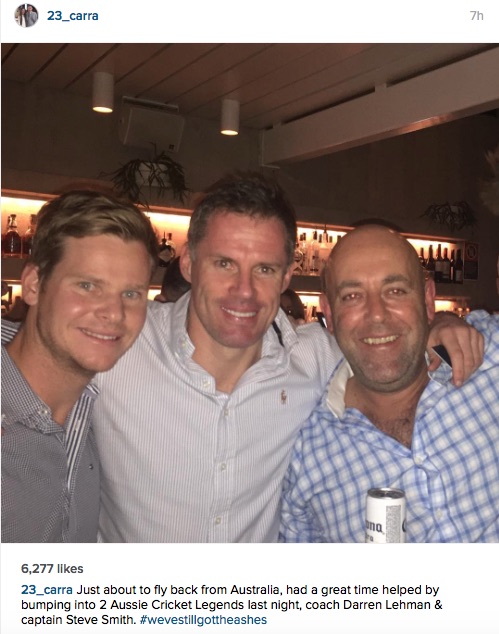 Smith and Lehmann had reason to celebrate themselves. Australia had just secured a 2-0 Test series victory over the West Indies courtesy of a rain-affected third-Test draw at the SCG.

But they were not on the winning side on their last tour of England in 2015, when Alastair Cook’s boys triumphed 3-2 to regain the little urn after their 2013-14 whitewash.