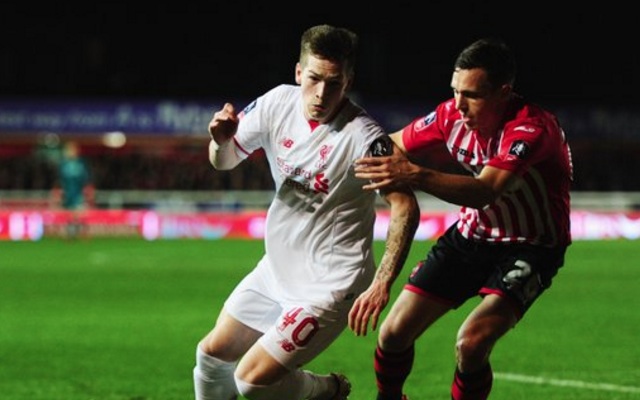 But they’ll have to navigate another tie at Anfield this month after only managing to secure a win thanks to a late equaliser from Brad Smith. Klopp picked a team of children, and with that solely in mind, it probably wasn’t the worst result.

Our buddies at Empire of the Kop have produced a super speedy match report which includes HD clips of the goals for your convenience.

Check out the original piece here if you fancy: http://www.empireofthekop.com/2016/01/08/exeter-2-2-liverpool-full-highlights-match-report-as-sinclair-scores-but-bogdan-nightmare-continues/

Liverpool came from behind twice at St. James’ Park to draw 2-2 with minnows Exeter in the FA Cup Third Round.

The game will be remembered for a nightmare blunder by Adam Bogdan and a practical Under-21 side picked by Jurgen Klopp. Tom Nichols gave Exeter an early lead before Jerome Sinclair’s first professional goal levelled the match. Lee Holmes bagged from a corner but Brad Smith’s powerful drive saved our blushes this Friday evening.

Our boss picked a ludicrously weakened XI, with only two players having appeared more than four times for Liverpool due to the injury crisis.

These were Christian Benteke and Jose Enrique, with the Spaniard playing his first game for a year, deployed in an unnatural centre-half position anyway. Elsewhere, Ryan Kent, Kevin Stewart and Tiago Ilori made full debuts for a side with an average age of 22.

Liverpool started the match as odds-on favourites, but just nine minutes in those odds were put into question as the hosts took the lead. Exeter broke down our left and Brad Smith failed to stop a cross, allowing Nichols to outmuscle Enrique and poke into the corner of the net.

But in fairness, the young Liverpool side bounced back and equalised through Sinclair just minutes later. A mix up in the Grecians defence allowed the teenage forward a chance and he finished coolly, bagging his first goal for us having made a debut three years ago.

The leveller settled Klopp’s kids, and Teixeira and Kent started to link up especially well – pushing the League Two outfit to sit deep. We began to dominate possession, and a rasping shot from the Portuguese playmaker was deflected wide.

But when things looked smooth, Exeter’s physicality and desire helped them get a foothold back in the game. Our fullbacks Randall and Smith were consistently failing to block crosses and Ilori looked vulnerable when anything was delivered into the box.

They should have had a penalty and missed a close-range header, but on the half-time whistle – scored from an in-swinging corner which totally deceived Adam Bogdan – who’s sadly proving he’s not up to scratch.

Brannagan broke down the left and stood up a cross to the back-post, but Christian Benteke’s towering header was excellently saved by the Exeter stopper.

On the whole though, the £32.5m Belgian was woeful, looking anything like the kind of superstar associated with that kind of sum.

Eventually we did find the leveller, after good work down the left from substitute Sheyi Ojo earned Smith a chance. The Australian finished with aplomb.

The goal set Exeter on the back foot and we pushed hard until the final whistle. Ojo should have been awarded a penalty but the home side deserved their draw and we don’t begrudge them a lucrative replay at Anfield.

Ilori was so physically exhausted he had to be substituted with fatigue, and Smith picked up a late injury, but hobbled on until the final whistle.

Surely Klopp will have no choice but to deploy a similar kind of reserve XI, and it’ll give the youngsters another chance to show him what they can do.