Chelsea will be determined to avoid another FA Cup giant-killing when they welcome League One side Scunthorpe United to Stamford Bridge on Sunday.

The Blues were famously dumped out in the third round by Bradford City last season in what many consider to be the biggest upset in FA Cup history.

There have been many more dark days like that at Chelsea this season, and the FA Cup arguably represents their best chance of silverware this term.

Interim boss Guus Hiddink, who lifted the trophy in his first spell with Chelsea in 2009, will be keen to leave his mark on the club and is likely to name a strong side.

Here, CaughtOffside predicts the lineup that Hiddink will name for the visit of the Iron…

Didn’t let Chelsea down during his run in the team earlier this season and deserves this opportunity after being somewhat unfortunate to lose his place to Thibaut Courtois.

Has won the FA Cup three times during his time at Stamford Bridge, and will be keen to make it four in case he signs off when his contract expires in the summer, as ESPN reports.

Was at the club when they beat Scunthorpe 3-1 in the FA Cup in 2005, but was rested that day by Jose Mourinho. Trophy-hunting Hiddink will not hand him the same privilege!

Will be more accustomed to the rough ways of lower-league strikers than Kurt Zouma because of his early-career loan spells, and so is likely to get the nod over the Frenchman.

The Spaniard is not your traditional foreign import to the Premier League and will relish the physical battle. Baba Rahman will be hoping for a start, but probably won’t get one.

Mikel was one of Hiddink’s most trusted servants during his first spell, and the Dutchman has wasted little time getting him back in the team. Excellent in the 3-0 win over Crystal Palace.

Cesc Fabregas also looked back to his best at Selhurst Park, but Hiddink would be wise to sacrifice the Spaniard for Matic because Scunthorpe are likely to pack the centre of the park.

If one Chelsea player deserves a rest, it is the ever-consistent Brazilian. But an injury to Eden Hazard against the Eagles means that he is likely to keep his place on the right wing.

Hiddink will hope that Oscar shows some of the combative nature that he did during a training-ground row with Diego Costa this week – as BBC Sport reports – against their visitors.

The decorated former Barcelona forward has sampled the Champions League, the World Cup and the European Championship. This would be his FA Cup debut if he is selected.

Hiddink confirmed via Chelsea’s official Twitter account that Loic Remy and Radamel Falcao are both out and therefore Scunthorpe will have the pleasure of playing against Costa, who is showing signs of rediscovering his form from last season. Look out for Patrick Bamford on the bench. 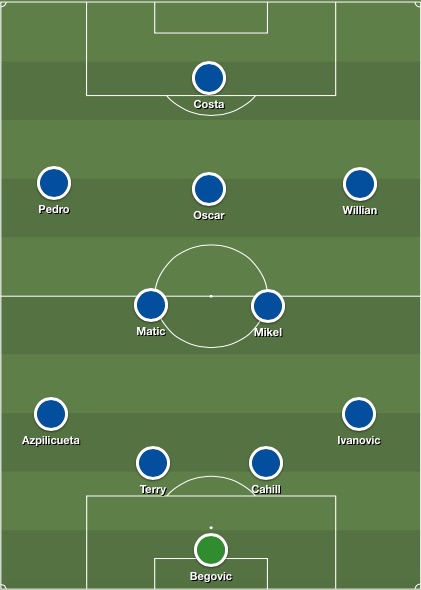