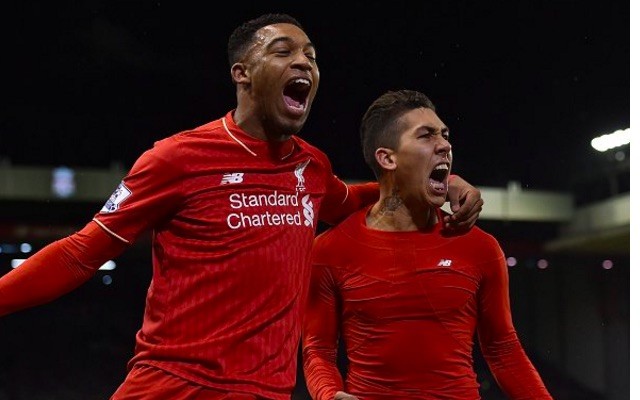 Our friends at Empire of the Kop produced a timely match report and player ratings from the unbelievable Premier League evening at Anfield tonight.

Liverpool snatched a last minute draw with the title favourites thanks to an unlikely source – Welshman Joe Allen!

Brazilian Roberto Firmino scored a breathtaking brace, but this was matched by Olivier Giroud – who’s now got 18 already this term.

Check out the goals and read the reaction below!

Liverpool snatched a dramatic 3-3 draw with Arsenal at Anfield, despite taking the lead on two occasions.

Joe Allen bagged from the bench in the dying seconds with most fans assuming the game was gone.

Jurgen Klopp went without a frontline striker, using Firmino as a false-9 and leaving Benteke on the bench. Ibe and Lallana flanked the Brazilian, while captain Henderson returned from injury. New signing Caulker began on the bench with Sakho ruled fit enough to start alongside Toure.

We burst out of the starting blocks and took an early lead thanks to the no.11. Can fizzed a shot at Cech, who couldn’t hold it – and Firmino cleverly finished with his left – his first Anfield goal.

Sadly Arsenal equalised. Our defence couldn’t cope with a simple straight ball played down the side of the box, and Ramsey fired in at the near post past Mignolet. Not good enough.

While we were stewing about the goal conceded, Firmino showed everyone why he cost £29m, curling in the top corner from 22 yards. It was stunning, and hopefully a sign that he’s arrived on Merseyside once and for all!

Liverpool were holding a lead like a fork holds soup, and Arsenal were level once again. Giroud got something on a corner in front of the Kop and Mignolet was beaten again.

Two goals conceded, both arguably the Belgian’s fault – and just as he’s about to sign a five year contract as well…

The sides took a breather after the manic start, but Liverpool were inches away from a half-time lead and Firmino an inch away from a hat-trick, when he hit the cross-bar with his left in stoppage time. The best player on the pitch by a mile.

The second-half started at the same pace of the first, and Campbell and Moreno missed sitters at either end. Ibe had Monreal in plenty of one-on-one situations, but the Spaniard defended excellently – much to the frustration of the Kop.

Liverpool were flustered and Arsenal made us pay for it soon after. Milner lost a 50/50 in the middle and Bellerin worked the ball into our penalty area. We messed up our chance to clear and Giroud finished beautifully.

Ozil was controlling the game and we were overly nervy on the ball when we needed some calm heads.

Benteke was brought on to get us level for Milner, who toiled, but lacked quality.

But his replacement insisted on playing football outside of the box when he’s a powerhouse centre-forward. Time and time again Liverpool worked themselves into promising areas, but the £32.5m Belgian was hanging around the edge of the box, or waiting for a short pass.

When we finally agreed to play to Benteke’s strengths, Klopp brought Caulker off the bench and a long ball was fired to the Belgian – who nodded across goal for late sub Allen to volley home.

The Kop went wild and we actually could have won the game if we’d been a bit more direct at the very end.

What do you think of our ratings, Reds?

Probably a kind rating. Shouldn’t be beaten at the near post for Arsenal’s opener, and fluffed at Giroud’s narrow strike from the corner as well. About to sign a five-year contract, which really worries us in truth.

A tough night for Clyne, who had to work very hard in defence, so wasn’t able to offer much offensively.

Slammed a second-half shot over the bar when he should have scored, but largely dealt with Campbell and the overlapping Bellerin well.

Toiled but ultimately contributed to a nervy, languid defence. He’s been a real servant to Liverpool, but he’ll be out of the side when one of Lovren or Skrtel return – or maybe even Caulker.

Hasn’t looked the same player since his 2014 injury, and was out of position for Arsenal’s first. Clumsy on the ball throughout and it could have cost us.

Started superbly, intercepting and using his power to boss Arsenal’s midfielders. His fizzed shot led to our opener as Cech deflected it into Firmino’s path, and he had a few other attempts from range as well. As the game grew on though Can’s level dropped, and he gave the ball away in some silly areas.

As he always does, injected work-rate and energy into a midfield – but while Henderson is a piano carrier – we need some more piano players. The captain made countless interceptions, which has earned him a 7/10.

Got the ball time and time again on the right wing, but Monreal had his number – tackling him nearly every time. Ibe badly needed to just whip the ball into the box earlier – especially when Benteke came on.

Buzzed around the final third and had a few chances late on to score, but Lallana wasn’t clinical, as he rarely is. Plays better in a fluid front-three though with a false-9, as he was allowed to tonight.

Playing very much on the left, Milner got on the ball often but lacked killer delivery. Lost a 50/50 in the second which led to Arsenal’s third.

Boom! A tidy left-footed finish and a wonder-goal from the Brazilian – who was a creative menace in the Arsenal defence throughout. His best game in a Liverpool shirt. Now, he must push on, which he failed to do after his brilliant match v City.

Benteke – 5/10 – Won a header which led to our equaliser but he was so frustrating elsewhere. He’s a centre-forward with poor movement but hovers outside the box.

Allen – 7/10 – Came on, added coolness to the midfield, scored the equaliser. Deserves a start next.