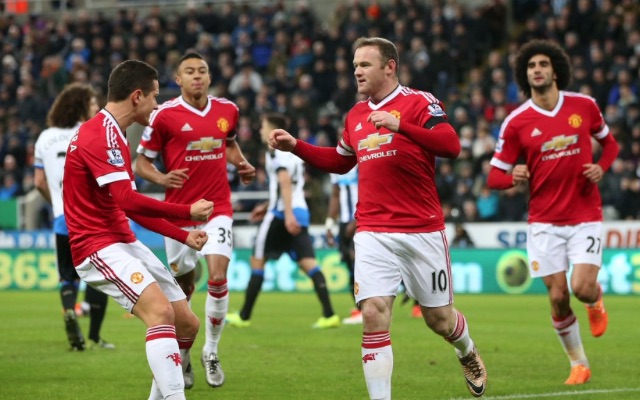 Unfortunately for Reds Devils fans, Louis van Gaal’s men were also unusually awful at the back as they blew 2-0 and 3-2 leads to draw 3-3 at Newcastle United.

Wayne Rooney was sensational. He scored a penalty and then set up Jesse Lingard to put his side in firm control, before Georginio Wijnaldum got Newcastle back in the game just before half time.

Midway through the second period, Chris Smalling hauled down Aleksandar Mitrovic, who scored from the resultant spot kick to bring Newcastle level.

Rooney then bagged a worldie from long-range to put Man United on the verge of a third straight win in all competitions, but Paul Dummett’s last-minute strike – deflected off Smalling – earned a point for Steve McClaren’s men to cap off a brilliant match.

Dea Gea was beaten by half of Newcastle’s six shots on target, but he did make a good save to thwart Wijnaldum with the score at 0-2.

Sometimes Young can blag it as a full-back, but not today!

Stupidly hauled down Mitrovic to concede the penalty which gave Newcastle their first equaliser.

Blind was far from at his best, but he still did OK.

Made more tackles – six – than any other player on the pitch.

Was reckless in the first half and could easily have been sent off as he committed four fouls – one of which earned him a yellow card. Also wasted a glorious chance to put his side 4-2 up late on.

Still yet to prove that United were right to splash out on him so lavishly.

Did very little off-the-ball work, but his passing was first class – as was that of Juan Mata (7/10) , who complete 100% of his 11 passes after replacing Herrera as a 74th-minute sub.

Took his goal really nicely and performed quite well overall, before being replaced by Memphis Depay (6/10) on 63 minutes.

Scored twice, including with this absolute belter, while his assist for Lingard’s goal was equally brilliant. Rooney held the ball up brilliantly and played the pass to Lingard at just the right time.