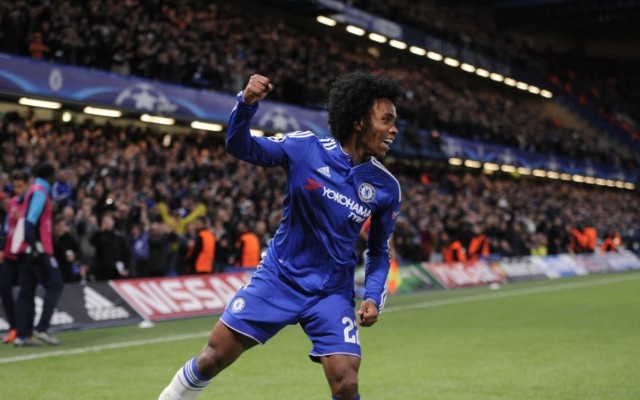 Willian has revealed to The Sun that he is keen to sign a new deal at Chelsea despite their troubles.

The Brazilian has been a shining light for the Blues this season. He is their top scorer with eight goals and has not let his standards slip in their fall from champions to 14th in the Premier League table.

Paris Saint-Germain and Bayern Munich have been linked with an interest in offering Willian an escape route from Stamford Bridge, which is likely to be without European football next season.

But the 27-year-old has handed Chelsea a boost by insisting that he is “very happy” to stay with a club whose future is even more uncertain considering that a new manager will arrive in the summer.

“The club knows exactly how I feel. I am very happy here. it was always my dream to come here when I was playing in Ukraine the realisation of a dream. I want to stay,” he told The Sun.

“But at the same time my head is calm I am just going to see how things go. I’m happy.

“I tend to not get involved in that side of things too much. I leave it up to my agent to deal with it but the club knows exactly how I feel.”

Willian still has two-and-a-half years left on the five-year deal that he signed upon joining Chelsea from Shakhtar Donetsk in 2013, but the Blues would be wise to act fast in order to tie the winger down.

Should the Londoners continue to struggle next season, there are likely to be more suitors in for Willian, and he may want to reconsider his options. Chelsea need to ensure that they are not caught out.