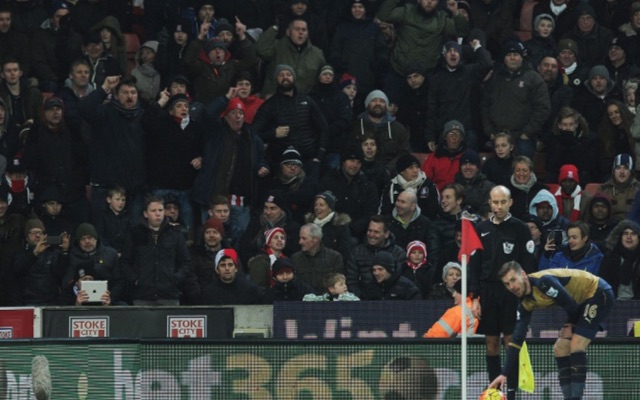 Football is so far detached from reality and it is sometimes rather shocking.

That was the case on Sunday as Stoke City fans aggressively taunted Aaron Ramsey because of an incident that took place six years ago, in which he had his leg broken by a tackle from Potters captain Ryan Shawcross.

Ramsey was booed pretty much every time he touched the ball in the 0-0 draw at the Britannia Stadium. The Daily Mail suggest that Stoke fans targeted Ramsey because of his refusal to accept an apology from Shawcross.

Choruses of “Aaron Ramsey, he walks with a limp” rang around the ground for much of the afternoon.

Speaking after the match, which saw Arsenal return to the top of the Premier League table on goal difference, Wenger revealed that he tried to block the abuse out.

The Daily Mail quote him as saying: “I shut my ears and think that’s the best way to deal with it. I don’t know what to do about it — I don’t know generally what you should do.

“When people get together they sometimes forget their individual responsibility. Maybe when you go home and watch it on television you are less proud.”

Celeb Arsenal fan Piers Morgan – infamous for spouting nonsense – was absolutely spot on for once.