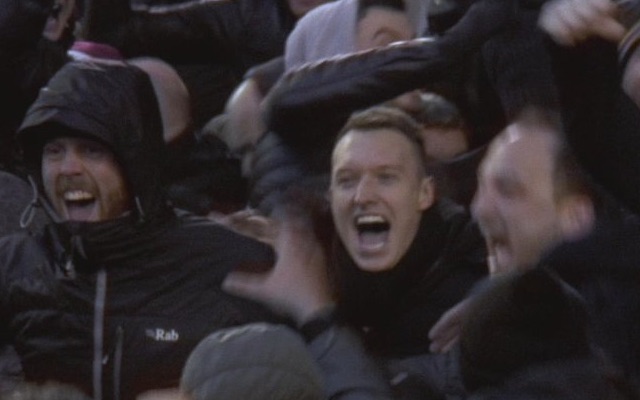 Their team didn’t play great football, but Manchester United fans loved Sunday’s trip to Anfield. Why? Because they beat Liverpool!

United fans went crazy after Wayne Rooney struck the only goal of the game on 78 minutes.

And there was a VIP in the away end. Injured defender Phil Jones decided to watch from the stands, rather than sitting with United’s subs. He got absolutely mobbed during the goal celebration. The former Blackburn didn’t seem too distressed, mind!

United’s 1-0 win sends them to within two points of Tottenham Hotspur in fourth place, while Liverpool remain eight points off the top four.

Jones was not the only United player to sit with the fans on Sunday.

Fellow injured stars Marcos Rojo and Michael Carrick were also in the away end.

Marcos Rojo joins Carrick and Jones as the latest member of the MUFC squad to be in the stands. #MUFC pic.twitter.com/2ua4lzFcsv