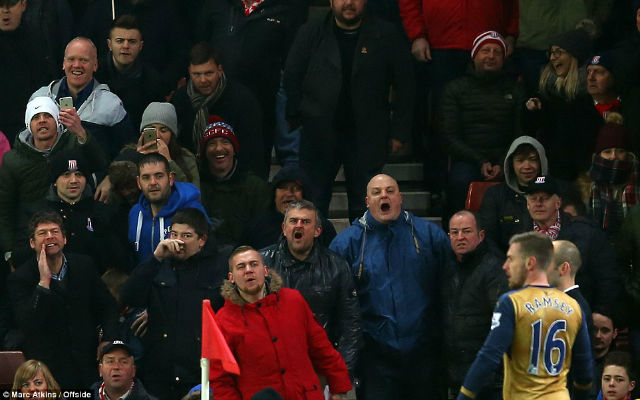 Stoke fans have been roundly panned this weekend after they spouted unspeakable abuse at Aaron Ramsey for the broken leg he suffered during the same fixture back in 2010.

The Welsh midfielder has refused to accept Ryan Shawcross’ apology for the incident, and apparently Stoke fans have reacted badly to this.

Ramsey was forced out for 10 months following the tackle, but has since come back stronger than ever, and Stoke fans took an almighty panning online for their treatment of the 25-year-old.

The best reactions can be seen below…

Stoke fans booing Ramsey because he had his leg snapped in half by Shawcross. As classy as ever. pic.twitter.com/oZZKYPF9qz

It's because Shawcross wrote a letter and tried to call Ramsey repeatedly to apologise but Ramsey won't speak to him or accept the apology.

Stoke fans are disgusting. Booing Ramsey. Yeah he dived to get Shawcross sent off that time… pic.twitter.com/PI7qAqYd7r

Ramsey getting hammered by the Stoke fans & booing him. It's his prerogative not to accept Shawcross's apology. To boo Ramsey is ridiculous

Ramsey getting pelters from the stoke fans cause shawcross smashed his leg into bits a few years ago pic.twitter.com/5cVC5mpfwO

Why are @stokecity's fans booing Aaron Ramsey? Are they mad his bone broke, when Shawcross tackled him?

How can Stoke fans boo Ramsey because Shawcross broke his leg pic.twitter.com/wlR41FXTxk