Chelsea could really do with bringing a prolific forward to Stamford Bridge this month.

The Blues’ genuine striking options so far this season have consisted of Diego Costa, Loic Remy and Radamel Falcao.

Just nine Premier League goals gave been scored by the trio this term – seven by Costa and one each from Remy and Falcao.

All three strikers have been linked with possible exits this month, so Chelsea’s need for new blood up top could become even greater in the near future.

Demba Ba is not reported to be on Chelsea’s shortlist, but the 30-year-old may well fancy a return to West London, if his latest Instagram post is anything to go by.

Ba, who currently plays for Shanghai Shenhua in China, was on Chelsea’s books for 18 months between January 2013 and July 2014.

He clearly enjoyed his time with the Blues. Is he pining for a return? 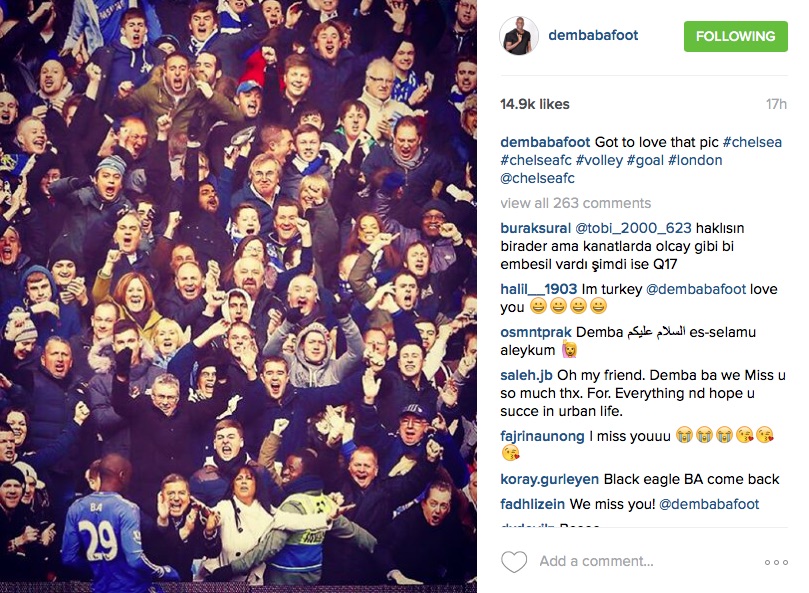 The photo above was taken moments after Ba scored with a stunning volley – set up by Juan Mata – to give Chelsea a 1-0 win over Manchester United in the FA Cup back in April 2013.

Senegal international Ba only scored seven league goals for Chelsea, but more than half of his 33 appearances were as a sub.

Ba’s goalscoring record for the Blues was modest, but he has been incredibly prolific elsewhere, netting more than one goal per game for West Ham, Newcastle United, Besiktas and now Shanghai.