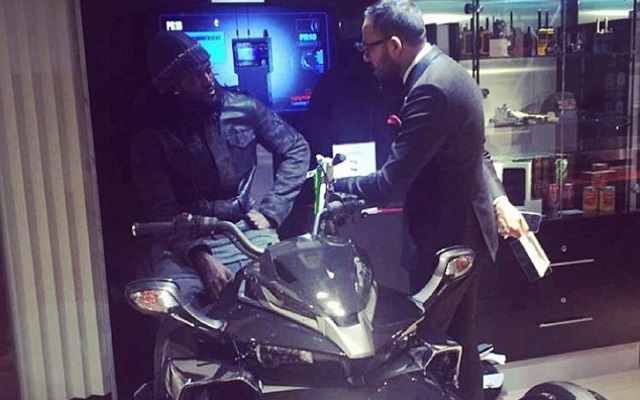 Out-of-work Emmanuel Adebayor doesn’t have a care in the world, at least not if recent shots of him out shopping at Harrods are anything to go by.

The Togo striker—who once earned the best part of a quarter of a million per week at Tottenham Hotspur—has been out of work since the beginning of the season, but we doubt he’s on the dole.

Indeed, shots of the former Arsenal, Manchester City and Real Madrid striker spending time with his personal shopper at Harrods suggest that West African is planning to splash the cash [as per the Daily Mail].

The hitman—sharing photos with his followers on Instagram—revealed that he’d tested out some new gym equipment for his London home, while also having a go on a three-wheeled Spyder power cruiser valued at around £20,000.

The 31-year-old’s spending spree has fuelled rumours that the attacker is edging closer to a January move back to London, with Crystal Palace heavily linked to the troubled forward.

However, Paris Saint-Germain may also emerge as a surprise option, with the attacker recently gushing in his love for the French capital on social media.