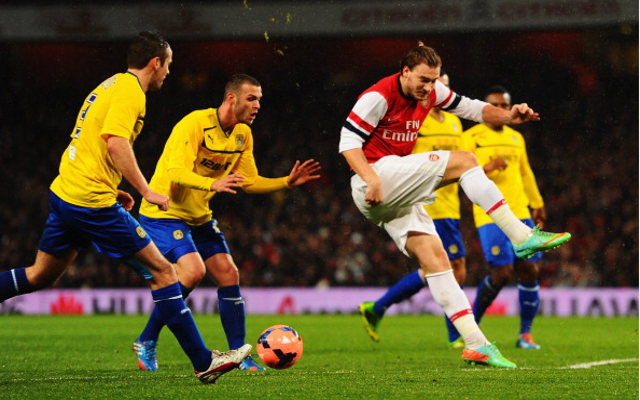 Crystal Palace manager Alan Pardew surprised the assembled media today when he admitted at his press conference that he is interested in signing Arsenal old boy Nicklas Bendtner.

The Eagles boss was being quizzed about a potential move for out-of-contract forward Emmanuel Adebayor when, out of nowhere, he dropped the name of another former Gunners striker.

Bendtner developed somewhat of a cult hero status during his nine years at Arsenal – mostly because of the high opinion he had of himself with little footballing evidence to back it up!

The Dane scored a respectable 47 goals in 171 appearances for the Gunners, but was never a regular under Arsene Wenger, and has only managed nine in 44 outings since moving to Wolfsburg.

Pardew seemingly wants to bring the 28-year-old back to England from Germany, and we would love to see it. Where Bendtner goes, entertainment usually follows even if the goals do not.