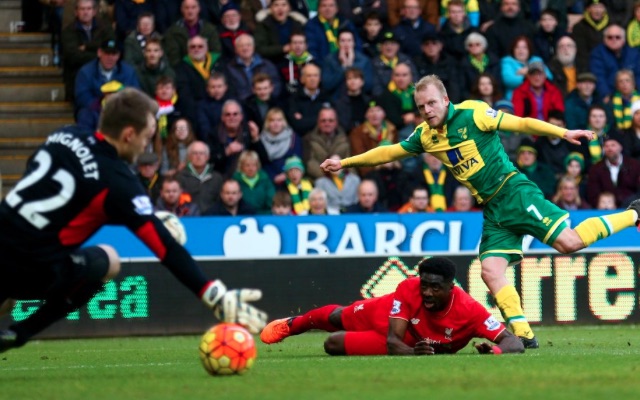 Jurgen Klopp must have been tearing his hair out watching these goals go in.

Liverpool had taken an 18th-minute lead against Norwich City at Carrow Road this afternoon through Roberto Firmino, but were behind by half time after some awful defending.

Set pieces have been their Achilles heel all season, and their failure to deal with a corner led to Norwich equalising through Dieumerci Mbokani’s back-heel just shy of the half-hour mark.

Although the Canaries striker deserves praise for a fine piece of skill, Liverpool should have been aware of Norwich being the Premier League’s most dangerous team from corners.

The goal could certainly have been avoided. Alberto Moreno’s clearing header should have gone wide not central, and Mamadou Sakho needed to be stronger with Mbokani’s back to goal.

Simon Mignolet may have been caught off guard by the instinctive nature of the effort and the power behind it, but should be disappointed to have allowed the ball to squeeze under him.

The Belgian could also be accused of being culpable for Norwich’s second goal on 41 minutes – a debut strike from former Everton forward Steven Naismith to rub salt into Liverpool wounds.

Tactical Analysis of @LFC‘s dismal defending v. Norwich; have they got away with this one!? https://t.co/uZaeXgG5tF pic.twitter.com/S4HQ4JtguL

Three Reds defenders look helplessly at each other as Naismith ghosts into space – nobody followed the Scotland international’s run – and Mignolet should not be beaten from that angle.

Defeat in East Anglia could see Liverpool end this Saturday 11 points adrift of the top four. With defending like this, Klopp’s boys have absolutely no chance of bridging that gap.