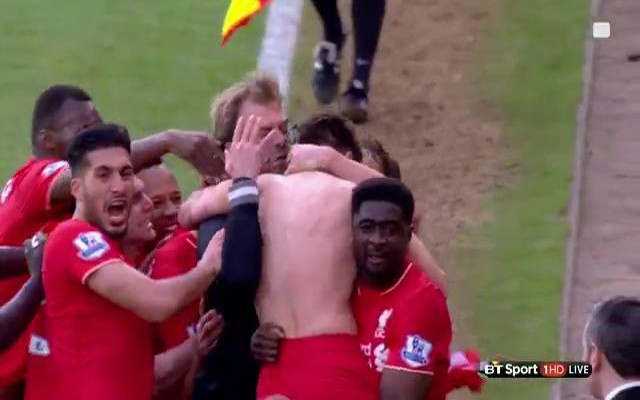 Let it never be said that Jurgen Klopp does not wear his heart on his sleeve. In the midst of celebrating an incredible win over Norwich City – a 5-4 victory that could very well go down as the Match of the Year – the Liverpool manager had his signature glasses knocked off of his face during a group hug!

In the video, Liverpool striker Christian Benteke, who helped Adam Lallana get in position for the fifth goal during the 90+4′ mark, can be seen moving his hand in to hug Klopp, only to knock the glasses out of his manager’s hands.

With so many bodies around him, it should be no surprise that when Klopp finally reclaimed his eyewear that they were broken.

Liverpool overcame a 3-1 deficit before taking a 4-3 lead at the 75′ mark. But Norwich City’s Sebastian Bassong tied the game 4-4 at 90+3′, but the Canaries’ mirth wouldn’t last long as Adam Lallana executed a late strike to seal the win for the Reds.