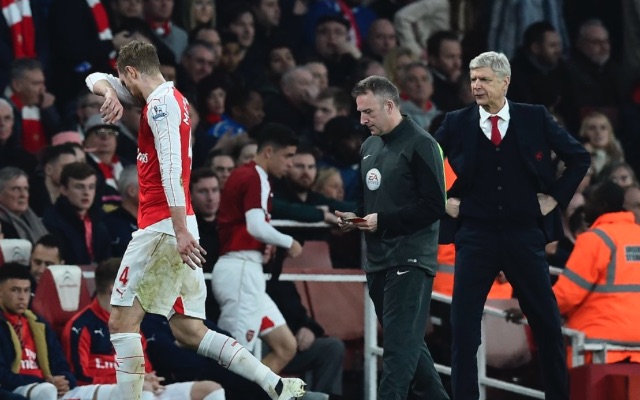 Diego Costa is the villain of the piece again as far as Arsenal are concerned.

The Chelsea striker was responsible for getting Gabriel Paulista sent off in September’s reverse fixture between the two London rivals, and was today involved in Per Mertesacker’s red card.

Referee Mark Clattenburg adjudged that Mertesacker had denied Costa a clear goalscoring opportunity by sliding in on the Spain international as he ran towards Petr Cech’s net on 18 minutes.

While it looks like a blatant red card at first glance, replays show that Mertesacker did not actually make contact with Costa, and that the Blues forward took a dive over the German’s leg.

Either way, it was an ill-judged tackle from the Arsenal captain, and the Gunners paid for his recklessness five minutes later when Costa – of course – opened the scoring for the visitors.

SEE MORE:
Influential Arsenal superstar insists that his future is with Gunners
Chelsea ready to sell £18m midfielder to fund late January business
Video: Riyad Mahrez with the assist of the season – chin up Mesut Ozil!