Emmanuel Frimpong is a bit of an idiot, right?

The former Arsenal man acts the fool a lot, but the only thing consistently funny about him is the state of his career.

Once hailed as the Gunners’ midfield saviour, Frimpong now plays for FC Ufa in Russia, having underwhelmed during loan stints with Wolverhampton Wanderers, Charlton Athletic, Fulham and Barnsley.

SEE ALSO: Minds blown at Britannia Stadium as Theo Walcott is seen running away from his future self

Don’t get us wrong. We don’t hate Frimmy. We just find him a bit annoying, especially on social media.

However, his latest joke on Instagram was pretty decent.

In fact, it may well even get a giggle out of a few Gooners, despite the subject of the gag causing a lot of pain – perhaps anger too – among the Arsenal community.

Arsenal lost 1-0 at home to Chelsea on Sunday, but that was only half the story.

The Gunners were reduced to 10 men in the first half of the London derby, after Per Mertesacker was sent off for a professional foul on Diego Costa.

Mertesacker’s dismissal meant that Arsene Wenger had to sacrifice an attacking player to bring on Gabriel to plug the gap in defence.

Olivier Giroud was the man who got hooked and he was clearly not happy.

Perhaps Frimmy’s joke will cheer him up? Maybe not… 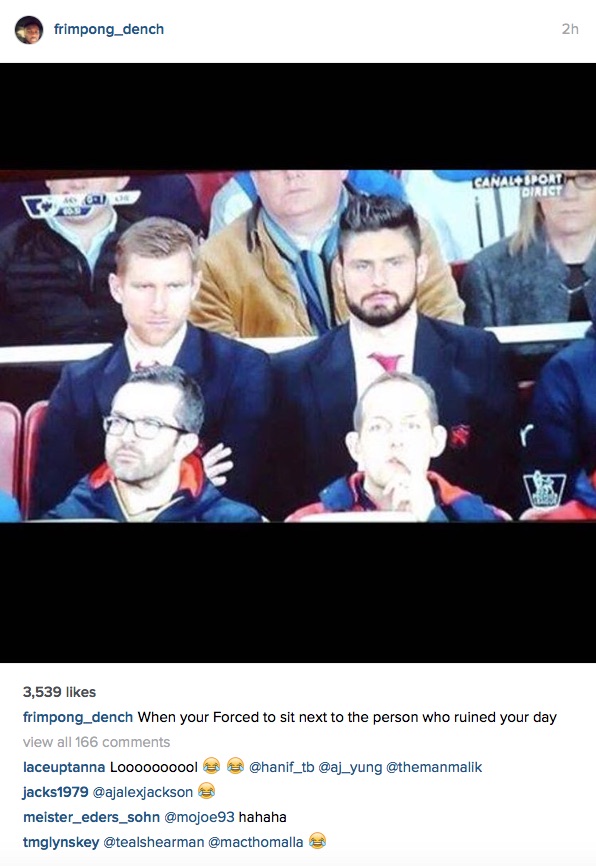