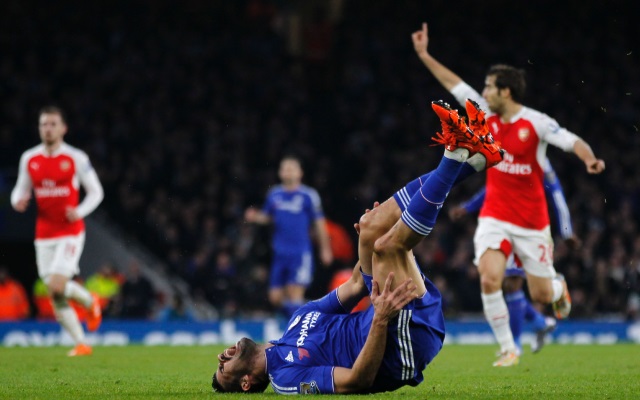 Former Arsenal chairman Peter Hill-Wood believes that Chelsea striker Diego Costa is a “serial cheat” after his antics on Sunday.

Per Mertesacker was shown a straight red card by referee Mark Clattenburg after just 18 minutes in Sunday’s showdown between the two clubs, with Costa going on to score the only goal of the game to claim all three points for the Blues.

However, the Spaniard came under immediate fire after the game with Arsene Wenger describing him as “clever” as it was the second time in two games this season that the striker had gotten an Arsenal player sent off.

However, Hill-Wood has taken it a step further and launched a scathing attack on the former Atletico Madrid star and accused him of getting Mertesacker sent off by feigning injury.

“He is a serial cheat and he gets away with it,” Hill-Wood told the Daily Star. “I think he deliberately ran in front of Mertesacker, who hardly touched him. Yet Costa rolls around as if his legs have been cut off. Once the red card’s been shown, he’s suddenly perfectly all right again.

“That’s because there’s absolutely nothing wrong with him. There certainly wasn’t soon after when he scored that goal. Personally I think the referee should have sent him off for diving. It’s very annoying because to me it is blatant.

“I thought Arsene was very restrained because he must have been furious. He gets criticised or penalised by the FA if he says too much.”

It is highly unlikely that Costa will face any ramifications for his actions, as Chelsea secured three important points in their bid to start moving up the Premier League table.

In contrast, it was a bitter blow for the Gunners in their push for a title this season, as the defeat leaves them three points adrift of league leaders Leicester City and level on points with Manchester City.

Wenger’s men will be desperate to put their disappointment behind them when they face Burnley in the FA Cup this weekend, but they will be eyeing an immediate response when they return to league action on February 2 against Southampton