Mauricio Pochettino has taken his Tottenham Hotspur players on a mid-season boot camp to Barcelona, but one player who won’t be taking any part in the training sessions is Jan Vertonghen.

The Belgian defender limped off in the second half of Saturday’s 3-1 victory over Crystal Palace after falling awkwardly following what appeared to be an elbow by Eagles striker Connor Wickham.

According to The Sun, he left Selhurst Park on crutches, and those claims have been validated by this picture taken of Vertonghen, Michel Vorm and Mousa Dembele enjoying their time in Spain. 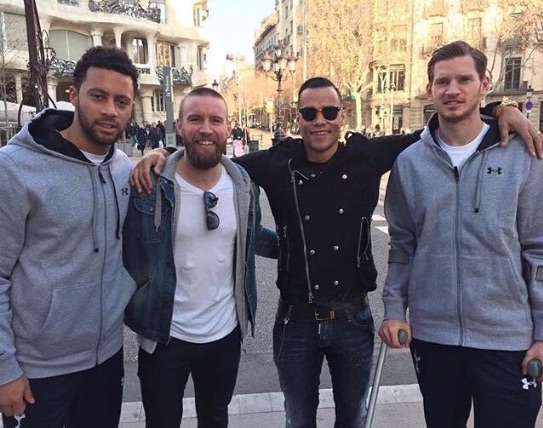 Spurs have confirmed that scans taken at the Clinica Quira hospital in Barcelona show that Vertonghen has suffered medial ligament damage, and plan to assess his progress during rehabilitation.

Further assessment & scans have confirmed that @Jan_Vertonghen sustained damage to his medial collateral ligament in his knee at Palace.

Our medical staff will continue to monitor his progress during his rehabilitation to determine when he will be ready to return to training.

A grade one sprain could sideline the 28-year-old for as little as three weeks, but a grade two or three injury could see Spurs without a key member of their title-challenging side for three months.

The latter would be a massive blow to Spurs’s hopes of a first English championship in 55 years. His partnership with Belgian compatriot Toby Alderweireld has been vital to Tottenham’s improvement.

Prior to Vertonghen’s substitution against Palace, the pair had played every minute of Tottenham’s Premier League season together and helped them to the best defensive record in the division.

His anticipated layoff is likely to mean a run in the team for 23-year-old summer signing Kevin Wimmer, who has yet to make a league start for Spurs, although midfielder Eric Dier could also deputise.