Juventus cruised past Inter Milan in this Wednesday’s Coppa Italia semi-final, with Alvaro Morata and Paula Dybala securing their place in the cup final.

Inter started off the season fantastically, and looked likely to be the Serie A’s eventual winners. Juventus have come storming back into the fray though, while Inter have dropped off somewhat. And the gulf in class was clear this past Wednesday night, as Juventus sailed past winning 3-0.

Alvaro Morata ended a four month goal drought to score Juve’s first, converting from the spot after on-loan Chelsea star Juan Cuadrado was brought down in the box. It looked to be a soft one on first glance, but the replays showed the referee unquestionably made the right choice.

Morata didn’t look like a player low on confidence when he stepped up to take the penalty, and smashed it past Samir Handanovic to make it 1-0.

It was the former Real Madrid striker who got the second as well, benefiting from a fortunate bounce of the ball. Patrice Evra’s cross was blocked, but when it fell to Morata, he spun superbly and lashed it into the far corner. 2-0.

Inter already looked in trouble, and they weren’t being adventurous enough to get back into the game. But if there were any hopes that they might mount a comeback, they were dashed when Jeison Murillo got his second yellow card of the game for a foul on Cuadrado and was handed his marching orders.

The result was already decided when Juve’s top scorer Paulo Dybala came on as a substitute, but the form he’s in at the moment it was hardly surprising when he got in on the action. He took a low cross first time, striking it viciously towards goal, catching Handanovic off guard and slotting the ball through his legs. The keeper probably should have saved it, but was clearly surprised by the snap-shot. 3-0.

Juventus are through to the final to face AC Milan, and with the form they are in at the moment they’ll be more than confident of getting the win. 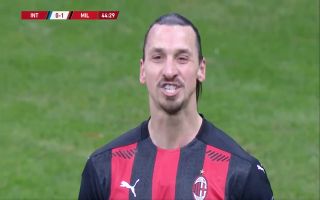 Video: ‘You want to speak about my mother!’ – Romelu Lukaku has to be stopped from fighting Zlatan Ibrahimovic in Milan derby clash apparently spurred by Swede’s dig at ex-Man United teammate’s mum January 26, 2021 21:25
Manchester United FC