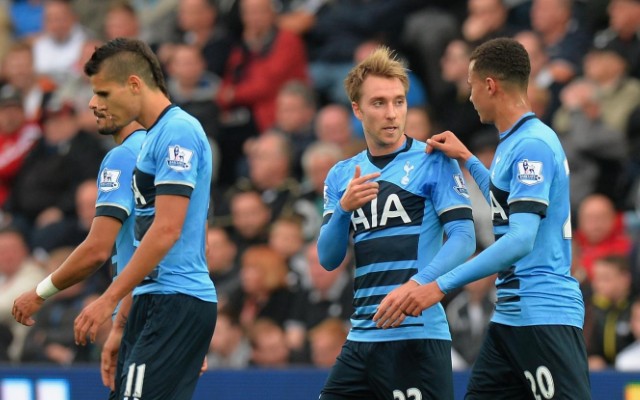 Dele Alli showed off his unbelievable tekkers on Saturday as he scored a goal-of-the-season contender in Tottenham Hotspur’s 3-1 victory over Crystal Palace.

And the 19-year-old was showing off his skills again at Spurs’s training camp in Barcelona, tricking teammate Christian Eriksen with this very cheeky penalty!

Alli distracts the Dane by flicking off his boot and then rolls the ball into the bottom corner. We don’t make much of Eriksen’s goalkeeping efforts, though!

Alli and Eriksen have been key figures in Tottenham’s tilt at the Premier League title this season. Spurs are fourth in the table, five points adrift of leaders Leicester City.

Both could be in line for a well-deserved rest on Saturday lunchtime as Mauricio Pochettino’s side travel to League One Colchester United in the FA Cup fourth round.

An indication of Alli’s monumental rise is that he was playing Colchester in the league for MK Dons last season. Now he is undoubtedly one of the best young players in England.

The midfielder has scored six league goals this season, and made an immediate splash at international level with a stunning strike in November’s win over France at Wembley.