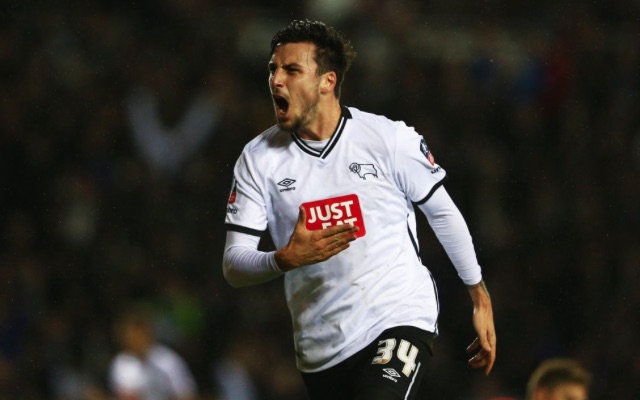 Derby County showed Louis van Gaal what can be accomplished with a bit of adventure with their equaliser in tonight’s FA Cup fourth-round tie with Manchester United at the iPro Stadium.

George Thorne embarked on an ambitious run through the middle, and controlled and finished superbly from Chris Martin’s pass to bring Derby level eight minutes before the end of the first half.

Thorne is playing as Derby’s deepest midfielder and yet showed willingness to get beyond his striker, who exploited a gaping hole in United’s defence to pick out the goalscorer with a lovely ball.

Visiting United fans may have watched that goal in amazement, having practically witnessed the abolishment of midfield runners by Louis van Gaal and his non-penetrative playing style.

Morgan Schneiderlin and Marouane Fellaini are United’s central midfielders this evening. Can you imagine either of them making that run? Of the current Red Devils squad, only Ander Herrera has that in his locker, and Van Gaal has been very reluctant to use the Spaniard in his best position.

United had earlier taken the lead through a stunning Wayne Rooney strike which showed that midfield runners are not always needed! However, Van Gaal would be wise to learn their benefits from Derby.