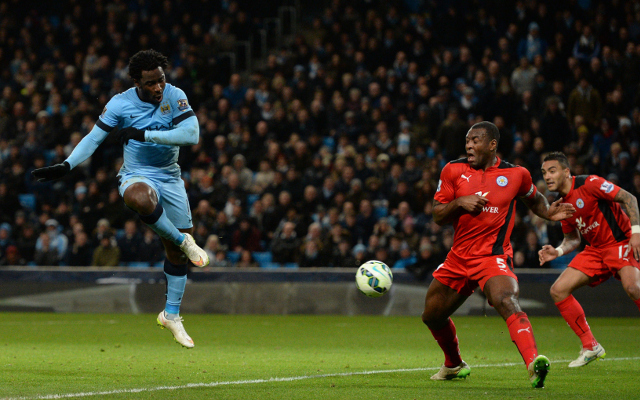 Manchester City striker Wilfried Bony has insisted that he doesn’t want to leave the club, who he considers to be the ‘fifth biggest’ in the world.

The Ivorian forward hasn’t wholly managed to establish himself at the Etihad Stadium since moving to the club from Swansea City a year ago, and while he enjoyed a fine scoring record during his time in Wales, he’s yet to truly convince in Manchester.

At Swansea, Bony managed 16 goals in 34 appearances during the 2013-14 season, before managing nine in 20 before leaving for City.

However, since the switch, he’s only scored six goals in 27 outings for the Citizens, despite featuring for a much better side.

While Bony has found himself behind Sergio Aguero—and even Kelechi Iheanacho on occasion—in the pecking order, the West African is keen to stick around at the Etihad Stadium.

“I absolutely do not want to leave Manchester City,” Bony told Eurosport.fr, before bizarrely proceeding to reveal that he ranked City as the fifth biggest team in the world.

“I want to stay here. I am in the fifth biggest club in the world. Why should I look elsewhere?” he continued.

“Of course, nobody is happy sitting on a bench. But I came to City to win trophies, I know I ‘m going to play close to 38 games this season.

“The price of my transfer does not put any pressure on me.”

While City’s standing within the Premier League has increased dramatically in recent seasons, it’s hard to justify Bony’s claim—particularly for a team that is still truly waiting to establish themselves as genuine Champions League contenders.